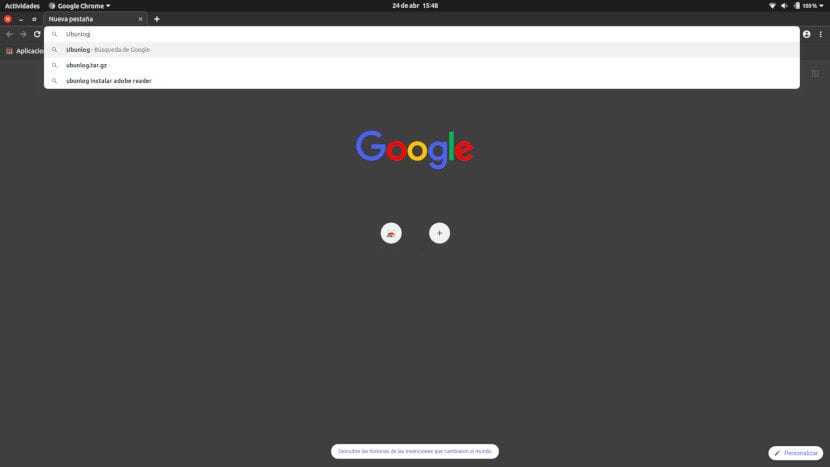 Yesterday we publish an article in which we warned you of the imminent arrival of Chrome 74. It took a long time to arrive, so much so that in Spain it arrived just before the end of the day for which it was announced, but it is already available for all supported systems. Among the novelties included remake we have a dark mode that, in theory and after macOS, only had to reach Windows. But the truth is that, as you can see in the header image, it also works in Ubuntu, at least using the dark versions of Yaru and Adwaita.

If I have to be totally honest, I don't use Chrome at all. For this reason, I am not sure since when this possibility has been available, but today I read online how to force the dark mode From the Windows version, I have come to Ubuntu to test if the same method worked and I have seen that it does. What happens is that I have remembered that I already had a dark mode activated, so I have returned the .dekstop file to its original state and, from what it seems, the option is activated automatically without having to force anything.

The way to force dark mode in Windows is by accessing the properties of its shortcut and in the "Destination" option add, without the quotes, "–force-dark-mode". I do not know if it is a bug, but the beta version of Chrome 74 for Windows allowed to switch from light mode to dark mode and the browser changed color at the same time as the rest of the operating system. In Ubuntu the same thing happens, in part: when we change a dark theme (checked in Yaru and Adwaita), the header does change color, but for the rest of the window to change, which is as you can see in the previous image, you have to close Chrome and reopen it.

So it works, it works. What a server does not know is if it works from Chrome 74 as in Windows 10, from Chrome 73 at the same time as in macOS or it has been working for a long time. I end with a question for Chrome users on Ubuntu and other Linux versions: Have you seen the dark version of Chrome before yesterday's release?