A few hours ago, Google launched Chrome 75, the latest version of your web browser. The stable version, already available for Linux, macOS and Windows, has arrived with the numbering v75.0.3770.80 to the stable versions channel and it is a minor release. As for functions, the most prominent is a new section in the settings called "Privacy and security" from where we can manage certificates or prevent web pages from monitoring our use on the Internet, among others.

Chrome 75 has updated its Web Share API to support file sharing in web-apps, which now allows us to use the same dialog box for sharing as any other app. Numeric literals have been modified to be easier to read by adding support for underscores and there is now a low latency alternative to the outdated NaCl / PPAPI solution. It has also been included Web RTC and improvements in animations. 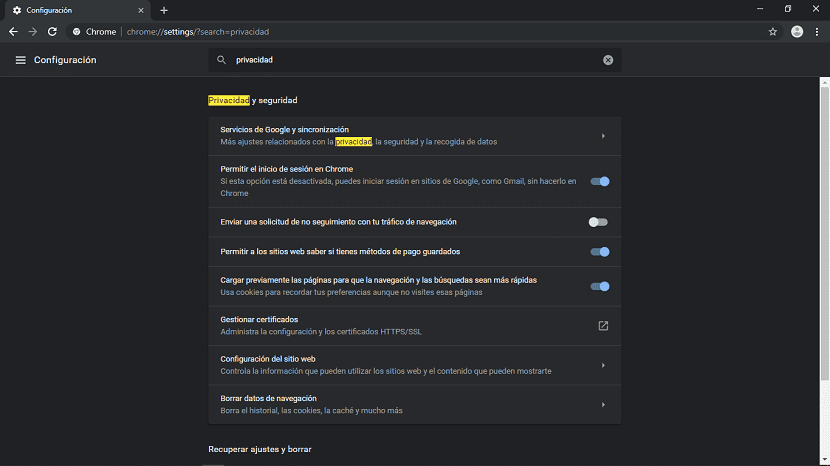 For Windows users, the earlier version Chrome was supposed to include support for the windows auto dark mode, that is, if we used the dark theme, Chrome had to be dark. This did not happen, or not in all teams. It seems that they have fixed the problem that we could experience some users and now, the second time we launch it, we can already see everything in its darkest mode.

The rest of the news are related to bug fixes, having included a total of 42 security patches what can we read here!. One of the most important is that now Fully enforces site isolation for all desktop users by default to mitigate Specter security vulnerabilities on Intel CPUs by rendering the content of each page in a separate process.

Chrome 75 has been progressively launched this morning, which means that by now it should be available to everyone. If the update does not appear, the options are to download the version that is on the official website or have a little more patience. Chromium 75 has been released at the same time than the "closed" version of the browser.