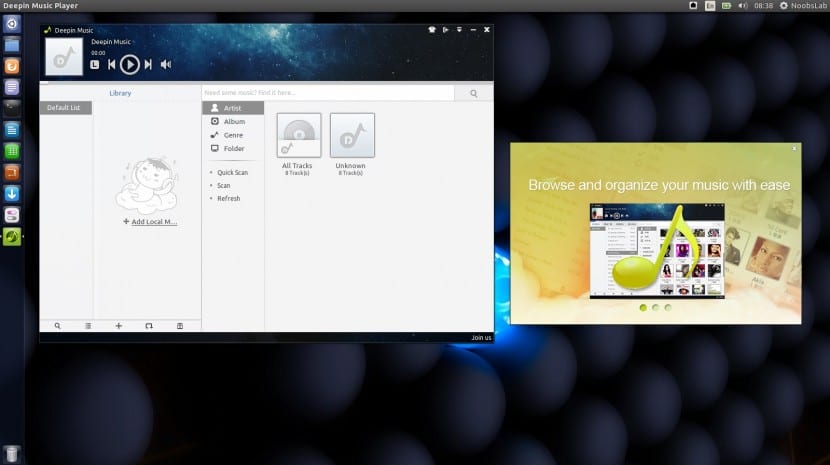 Deepin Music Player is an audio player designed by the Linux team Deepin and is the default player for that distribution. It is an application with impressive capabilities, with a brilliant and customizable interface, support for letters and many more.

It is a player totally free and open source, released under the GNU General Public License or GPL. Deepin Music Player also offers support for FM radio, support to play audio online and and it also offers a minimalist interface known as minimode.

Among the main features of Deepin Music Player we found the support for add-ons that extend their features, playback of audio CDs, playback of formats without loss of quality —WAV, FLAC or APE among others—, conversion between different audio formats, playlists, a graphic equalizer, management of the music library and support to read the lyrics of the song.

This last point requires some special attention, since you can choose between two ways to display the lyrics. These modes can also be customized, as the type of font used, its size, its alignment, the color scheme, and other custom settings can be changed.

Deepin Music Player can be customized with solid colors and sinks, and allows users to export their skins own. It also has a history of playback, cross fade, minimized to the systray and hotkeys among other things.

How to install Deepin Music Player

For, install Deepin Music Player in Ubuntu 15.10 you have to follow the already familiar process of adding the PPA, resynchronizing the repositories and finally installing the package. To do this, open a terminal and execute the following commands:

If you would like to install Deepin Music Player in Ubuntu 12.04 —Which is still supported— you can use the commands we just gave you. If you dare to try it, do not hesitate to come and tell us about your experience in a comment.