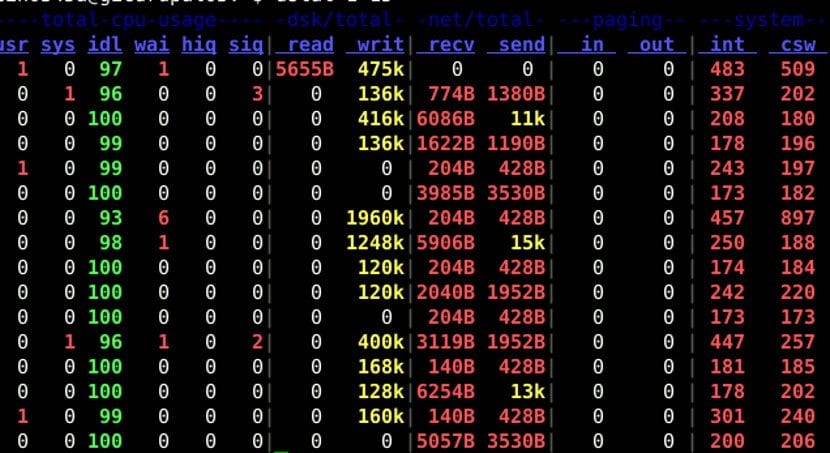 The developer of la dstat system monitoring utility which was developed since 2004, who offered a replacement universal and more functional for the vmstat, iostat, mpstat, netstat and ifstat utilities, announced the completion of project development due to naming conflict caused by actions of Red Hat.

Dstat overcomes some of the limitations of the aforementioned utilities and adds some additional features, more counters, and flexibility. Dstat is useful for monitoring systems during performance tuning tests, benchmarks, or troubleshooting.

This utility allows you to see all the resources of your system in real timeFor example, it can be used to compare disk utilization in combination with your IDE controller interrupts or to be able to compare network bandwidth numbers directly to disk performance (in the same range). 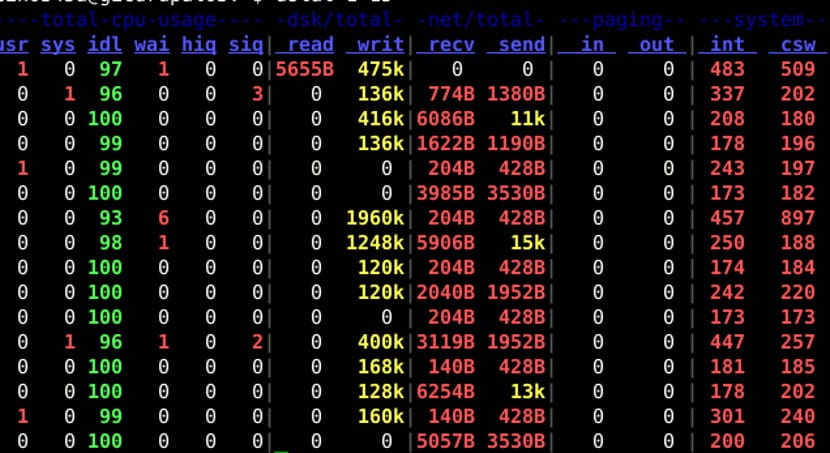 Related article:
Dstat: a tool to monitor the performance and resources of our team

In addition to it Dstat provides detailed selective information in columns and clearly indicates in what magnitude and unit the output is displayed. Less confusion, less mistakes. Most importantly, it makes it super easy to write plugins to collect your own counters and extend them in a way you never expected.

The Dstat output by default is designed to be interpreted by people in real time, however, you can export the details to the CSV output to a file for later import into Gnumeric or Excel to generate charts.

As we mentioned at the beginning, developer in charge lost motivation to continue development by Dstat after Red Hat decided to replace dstat with a new self-designed utility (from Performance Co-Pilot kit) offered under the same name.

The author of dstat (Dag Wieers, one of the founders of ELRepo and RepoForge / RPMforge) you do not see further development of the project and do not intend fighting a multi-million dollar corporation, demonstrating the unethical nature of creating competing products with the same name.

In addition, last year it caused the removal of dstat from the Fedora repositories and the inclusion in Fedora 29 of a replacement for the Performance Co-Pilot project.

It is proposed that all error and problem messages in the original dstat file sand send to Red Hat after this decision.

With this, little more than 40 reports of problems that were previously open are closed with a note that you must contact Red Hat for a solution.

And it is that a few days ago, the final version of dstat 0.7.4 was published in which a key change in which support for Python 3 was implemented.

On the other hand, the Red Hat version was also written in Python and was initially compatible with Python 3, while the original dstat remained linked to Python 2.

In November 2016, posting of changes to the main dstat repository stopped and the project seemed abandoned (development resumed only in January 2019, but Red Hat began developing its own version of dstat in 2018 with the goal of create a compatible replacement capable of working in Python environments 3).

Interestingly, Dag Wieers was also previously involved in a similar conflict. related with the intersection of the dconf utility I was developing with the dconf system of the Gnome project (the dconf utility was already distributed in distributions at the time of the appearance of the new Gnome toolset in the Gnome development, Dag Wieers informed them of the existence of an existing project with that name, but it was ignored).

Unfortunately Dag Wieers has already had to go through this problem for a second time, so perhaps many of us think that the best thing would be to take actions such as registering names or something like that.