A few weeks ago, a server wrote an article explaining why he was losing hope on the Snap packs. These kinds of next-gen packages promise the moon, but three years after their launch they still haven't taken off as they should. But hey, all your problems come to nothing compared to a problem that I experience many times when testing software in a package Flatpak, the rival of the Snap that is leaving me a very bad taste in my mouth.

It all started when I wrote an article about Steam. The installation your Flatpak package was simple, fast clean and everything seemed to be perfect… until she decided she didn't want to open up anymore. At the time I thought it was a Steam problem, that they hadn't done their job well, so I uninstalled the Flatpak package and now I'm using their APT version. The problem is that this is something that I am seeing constantly, the last time a moment ago where I wanted to try the open source virtual assistant Almond.

Some Flatpak packages don't even open

If I want to test it, I probably have to test on an Ubuntu virtual machine or with a USB Live with persistent storage, but on my Kubuntu Almond doesn't even want to open up. If I execute the command that they provide us on their website, I end up receiving a message that says that time has run out and I am left with two feet of my nose. And on their website they do not offer another version, such as Snap or an APT from their own repository.

This happens to me, in part, in the Flatpak version of Kdenlive: takes so long to open I used to try to open it multiple times, which ended up with multiple windows of the same program open across my desktop. In the end I have decided to go back to Kdenlive 18.12.3 waiting for the APT version to update. To be honest, I don't know if this flaw is more noticeable in Kubuntu than in other Ubuntu-based distributions, but it makes it clear that the fact that they work on many operating systems does not end up being true, not always. 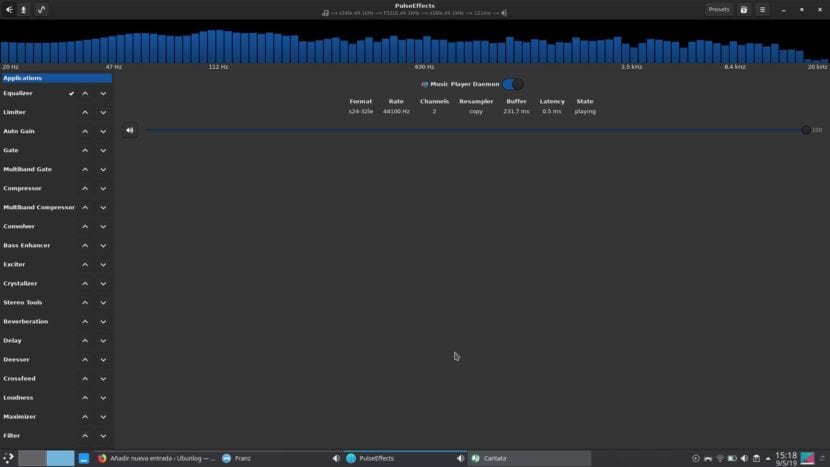 Flatpak version of PulseEffects in Plasma

Another problem, shared with Snap packages, is that as it is a "closed" package with all dependencies included, your image is already predefined. For example, I use PulseEffects in its Flatpak version and its design looks better in the GNOME graphical environment. Also, it does not respect the custom setting of having the buttons on the left, which ends up confusing me. Other applications have a clean interface, but few are perfect unless the graphical environment for which it was created is used.

And there are many graphic environments. There are some Flatpak packages that have been created with elementary OS in mind, which on top of that makes them have fewer buttons (there is not the minimize button). In short, the image of a Flatpak package it is difficult to be perfect on our preferred Linux distribution.

Where i don't have no complaint is in the updates. The aforementioned Kdenlive has been available in version 19.04 for a long time and Franz, who works perfectly for me, was soon updated to version 5.1 that I am using now. I'm not sure why developers upload them to Flathub sooner than to the Snappy Store, but pretty much everything we find as a Flatpak package is up-to-date software. In the Snap ... nope. Mozilla usually takes a long time to update Firefox in its Snap version, the APT version being available many times before.

But I want to end this post with some optimism, just as I did with the opinion post on Snap packages. We are facing packages that are not yet four years old and will still improve a lot over the years. For example, I am using GIMP in its Snap version because it is in Spanish (in Kubuntu) and the APT version is not. As for Flatpak packages, I use PulseEffects and Franz, and in both cases I am happy. Franz does integrate perfectly into the system, while PulseEffects does not give me problems beyond having a different image and that every time I start it tells me to restart it because it has been updated.

What do you think of Flatpak packages?

Full path to article: ubunlog » Ubuntu » Flatpak, a type of package that disappoints as much or more than Snap [OPINION]