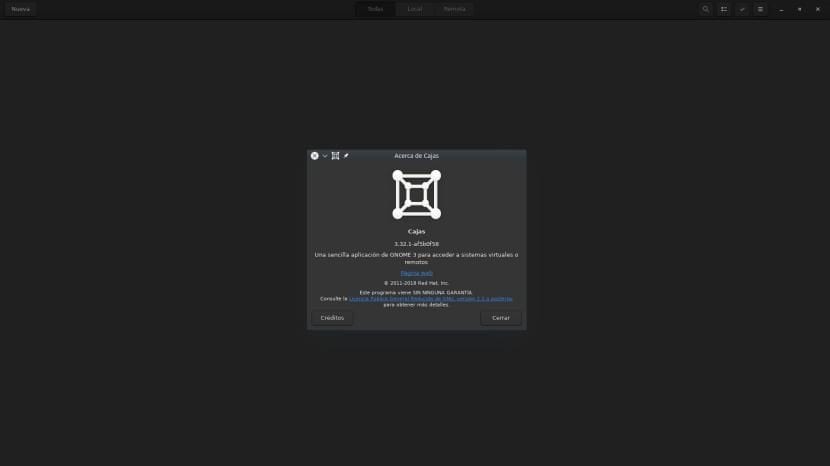 If you have not tried yet GNOME Boxes, try it. For me, what in Spanish is known as GNOME Cajas will be the best program to run virtual machines of those that will be in Linux. Why do I speak in the future? Because currently it doesn't work as well as it should. At least on Kubuntu, it crashes when trying to open some ISO images. Today they have released a new version and this problem is still present, I insist, at least the Kubuntu.

The new version is GNOME Boxes 3.32.1 and is now available at Flatub. Among the novelties that it includes we have a new app icon, which is basically the same as the previous one but a little more aesthetic. No, they have not marked a "Post Office", but just a little (who does not understand the reference, click here!). They have also added support for sharing folders for users who install the Flatpak version.

The rest of the news are the following:

If you have not tried it, I insist, try it. Right now, to carry out my tests in Ubuntu, I have a virtual machine in Virtualbox, a program that has been around for many years and that is more reliable. The bad (very bad) is that if what we want is to test an operating system in a Live Session, the window looks very small. In order to see a virtual machine in full screen we have to install the Guest Additions. This is not necessary in GNOME Boxes: if what we want is to make a normal non-exhaustive use of an operating system, practically everything works from the beginning, possibility of resizing the window included.

But of course, they have to keep polishing the software. For example, it crashes when I try to open an Ubuntu ISO, but not if I try to open the other flavors of the Canonical operating system. Of course, in general, the best and most complete options are the paid ones, such as VMware Workstation. GNOME Boxes, like virtualbox, is a program specially designed to test operating systems, Linux-based in the case of Boxes. I think that in the future I will leave Virtualbox aside and switch to GNOME Boxes, but that future has not yet arrived if my main operating system is Kubuntu.

I have tried it in Ubuntu and it does not give the same problems, but Ubuntu uses GNOME as a graphical environment, while Kubuntu uses a Plasma that uses its own integration and that can present problems when running applications based on GNOME or other graphical environments. At least that's the way it is in my case. What do you think of GNOME Boxes?