One of the new features that GNOME 3.32 includes is what is known as HiDPI Fractional Scaling or fractional scale. What is this? Well, the GNOME default configuration only allows the user interface to be scaled in whole numbers, which is 100%, 200%, etc., which does not look good on all HiDPI monitors. The fractional scale allows you to put other percentages, such as 125% or 150%. It was only supposed to be experimental in Wayland, but thanks to Marco Trevisan's discovery it can also be used in an X11 session.

But before going on to say how to activate this function, let's comment something: "experimental", by definition, means that right now it's an experiment. In software, you experiment with things that often come true in the future, but that future has not yet arrived. It seems that the launch of the fractional scale will be official in Ubuntu 19.10, but now it is necessary to activate it with a command. It remains to say that we can experience failures and that we should not use this function if our work depends on something secure.

There are two different ones depending on whether our session is Wayland or X11. Logically, we need to use supported software, which is GNOME+3.32 in Wayland and Ubuntu 19.04 Disco Dingo in X11. The commands are for Wayland: 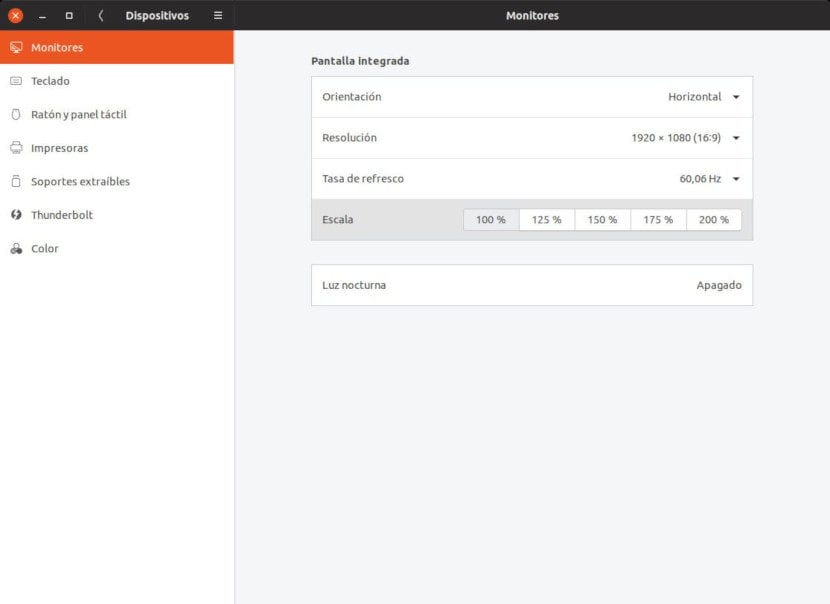 The result is the same in both Wayland and X11 and the option appears in Settings / Devices / Monitors, as you can see in the previous screenshot. Taking into account that the function is in the experimental phase, we cannot know if in the future they will add a "fine adjustment" to be able to add the percentage per hundred manually, but for now we can use the scale at 100%, 125%, 150%, 175% and 200%, at least on a laptop with a Full HD screen (in other cases it stays at 150%). This makes it easier for the image to look better on any HiDPI monitor.

If you don't like the change for whatever reason, you can go back with the following command:

You don't even need to close the Settings app for the changes to take effect. Are you one of the users who will do well with the new experimental function of the fractional scale?

Related article:
Things to do after installing Ubuntu 19.04 Disco Dingo