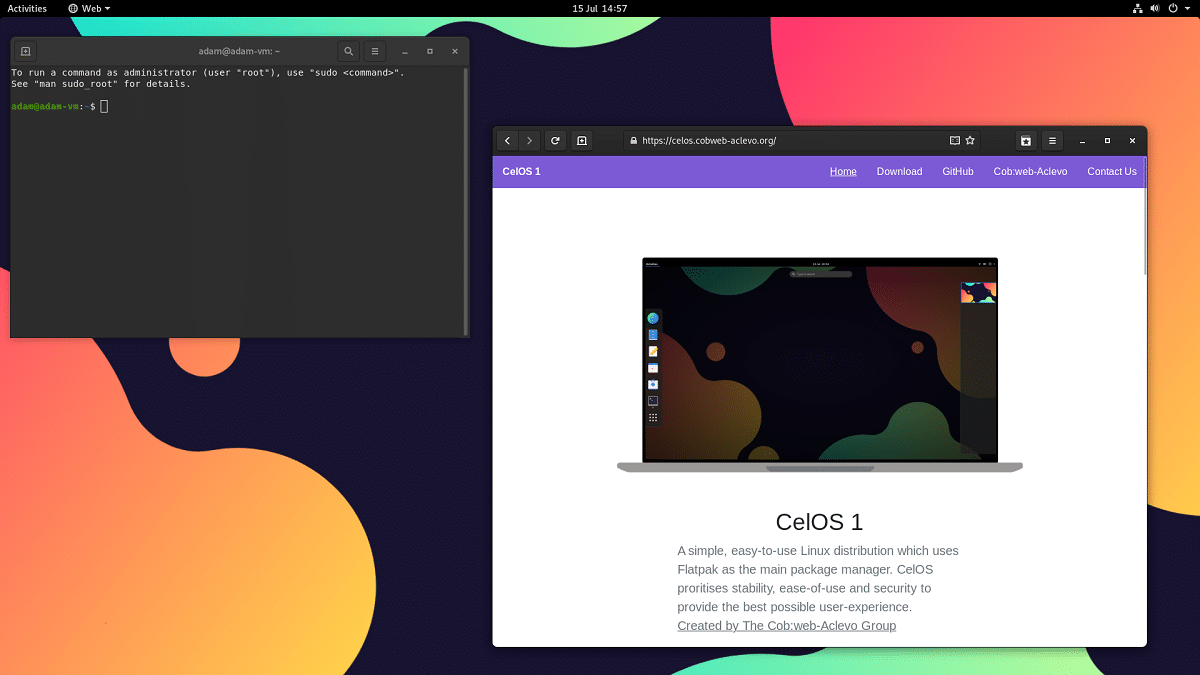 Several days ago the release of the new version of Ubuntu 22.04 LTS “Jammy Jellyfish” a long-term support (LTS) version with updates for 5 years, which in this case will be until April 2027.

A version in which a lot of changes have been made and of which, for example, the update of the GNOME 42 desktop environment stands out, which offers 10 color options in dark and light styles, which arrives with the Linux kernel 5.15 and that in some devices linux-oem-22.04 will be provided a 5.17 kernel, plus the systemd system manager has been updated to version 249 and in which for early response to memory shortages, the systemd-oomd mechanism is used by default, among other things (if If you want to know more about it, you can consult the note that was published here on the blog about what's new).

And is that the point of talking about the release of Ubuntu 22.04, is that days after it se released the beta version of the CelOS distribution (Celestial OS), which unlike other distributions that position themselves as "derivatives" this one is not, as it is basically a rebuild of Ubuntu, in which the Snap package management tool is replaced with Flatpak.

That is, an Ubuntu without Snap, in which instead of installing additional applications from the Snap Store catalog, integration with the Flathub catalog is proposed.

Set includes a selection of Gnome applications distributed in Flatpak format, as well as the ability to quickly install additional programs from the Flathub catalog.

As a user interface, the usual Gnome with the Adwaita skin is proposed, in the form in which it is being developed by the main project, without using the Yaru skin that is offered in Ubuntu. The normal Ubiquity is used as the installer.

are excluded of the basic distribution font-viewer, gnome-characters and ubuntu-session and to which the packages gnome-tweak-tool, gnome-software, gnome-software-plugin-flatpak, Flatpak and gnome-session were added, as well as the flatpak packages Adwaita-dark, Epiphany, gedit, Cheese, Calculator, clocks, Calendar, Photos, Characters, font viewer, Contacts, Weather and Flatseal.

The differences between Flatpak and Snap come down to the fact that Snap offers a small base runtime stuffed with a container based on monolithic versions of Ubuntu Core, while Flatpak uses additional runtime layers in addition to the main runtime. and updated separately (packaged) with typical sets of dependencies for applications to work.

Thus, Snap moves most application libraries to the package side (recently it has been possible to move large libraries, such as GNOME and GTK, to common packages), and Flatpak offers packages of common libraries to different packages (for example, the libraries have been moved to the required package to run GNOME or KDE programs) to make the packages more compact.

Flatpak packages use an image based on the OCI specification (Open Container Initiative), while Snap uses the SquashFS image mount. For isolation, Flatpak uses the Bubblewrap layer (it uses cgroups, namespaces, Seccomp, and SELinux) and to organize access to resources outside the container, the portal mechanism. Snap uses cgroups, namespaces, Seccomp, and AppArmor for isolation and pluggable interfaces to interact with the outside world and other packages.

Snap is developed under the full control of Canonical and is not controlled by the community, while the Flatpak project is independent, provides better integration with GNOME, and is not tied to a single repository.

For those who are interested in being able to try CelOS I must mention that you can currently obtain two images of the system. One of them is the stable version that is currently still on Ubuntu 20.04 LTS and the other image that was already mentioned is the beta version, which is on Ubuntu 22.04 LTS.

The size of the installation image is 3.7 GB and can be obtained from the link below.