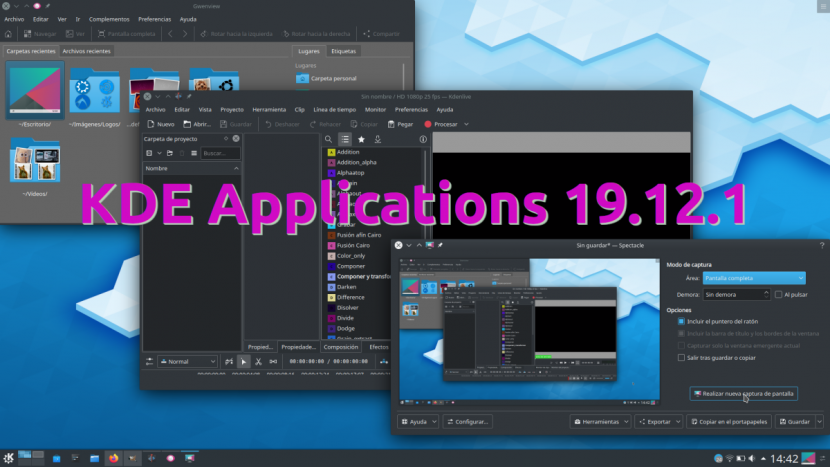 KDE released the first maintenance update for the 19.12 series of its applications a few minutes ago. It is about the KDE Applications 19.12.1, the version that coincides with the January 2020 release. Being a maintenance version means that it does not include new features, but changes and improvements that will help polish the hundreds of applications that KDE Community develops for Linux.

At this point, here in Ubunlog we used to say that the KDE Community had published two articles about this release, the one that tells us about its availability and the one that details the complete list of changes, but this time it was not the same: it has published release notes, download wiki, source code information and change list. The page where they include all changes is also different: now you have to click on the "Show" next to a package name to see what new features have been included in the update. Probably in the future we will start saying that "KDE Community has published 4 articles" instead of two.

Related article:
Elisa, the default music player in Kubuntu 20.04 ... or that's the intention

In total, counting all the changes that have been included between all the applications, KDE Applications 19.12.1 comes with 268 changes. Many of these changes, no less than 75, have been destined to improve Kdenlive, the famous video editor that, after the news included last year, also introduced many problems. Another major piece of software that has received a lot of improvements is Elisa, which could become the default player in Kubuntu 20.04 LTS Focal Fossa.

KDE Applications 19.12.1 is now available in code form, but we have yet to wait a while for updates to arrive to Discover. KDE Community usually waits for the release of at least one maintenance version to upload them to its Backports repository, but sometimes we have to wait until the last corrective version (as in this case), which would coincide with v19.12.3 that is scheduled for March of this year. Users of operating systems like KDE neon should receive them much earlier.