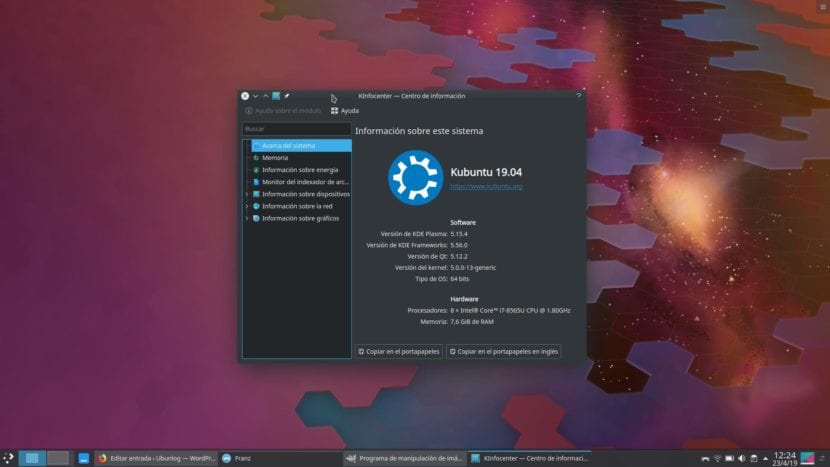 On April 2, the KDE community had the pleasure of announce the release of Plasma 5.15.4. I use Kubuntu and had the repositories added to update to the latest version, but the update did not arrive. I was so surprised that I removed the repositories and added them back to see if the new version would come to me ... and nothing. After more than two weeks, I think I already know why: Kubuntu 19.04 already comes with Plasma 5.15.4 installed default.

This version includes several improvements, including one related to the Nvidia drivers. I don't know if the bug they fixed has to do with one that I am experiencing, but I see pieces of the black screen when I wake up my laptop after a suspension. If so, in my case they have not solved it. If they don't talk about it, they will still have to improve things in future versions, so I will add the official repositories again.

Kubuntu 19.04 also has Wayland version available so that any user can test it, but first you have to install the package plasma-workspace-wayland. canonically warn that although it is available, it is not supported and that any user who needs a stable desktop experience should choose the normal “Plasma” session when logging in.

Kubuntu 19.04 was released on April 18, the same day as KDE Applications 19.04, so it did not have time to include the new application package. These new versions will supposedly arrive sometime this week and right now what you have available is the version 18.12.3 which was released on March 7.

Like the rest of its brothers and as we already knew for weeks, Kubuntu 19.04 arrives with the Linux Kernel 5.0, a kernel that comes with support for much more hardware than the previous version. As a data, my computer continues to present problems in the image as I mentioned above and the touchpad still does not offer me all the options. Are you using the latest version of Kubuntu? How about?