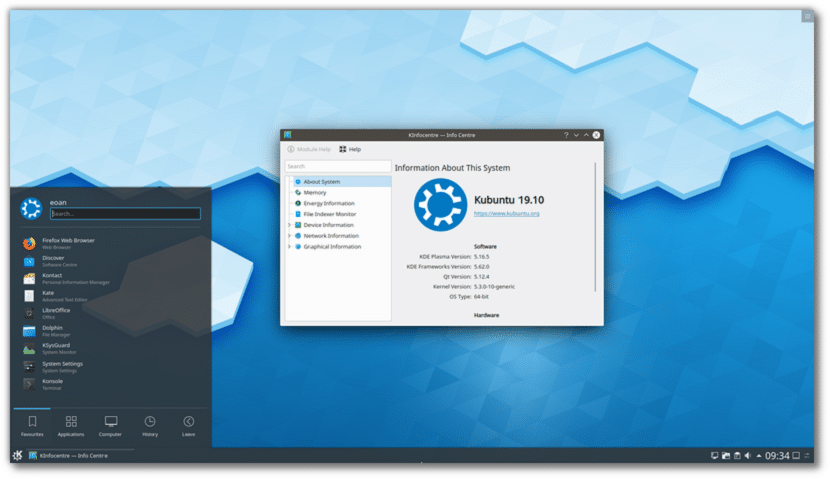 Today Canonical released To the general public the new version of your Linux distribution, Ubuntu 19.10 Eoan Ermine (you can know its details in the next post) along with which the new versions of its other flavors were also released, of which in this article we will talk about Ubuntu 19.10.

Within the news of Kubuntu 19.10 we can find that those that arrive with Ubuntu 19.10 stand out such as the introduction of Kernel 5.3 as the core of the system, along with which the LZ4 algorithm is used, which will reduce boot time due to faster decompression of data.

Another novelty that accompanies Kubuntu 19.10, from Ubuntu, is that since the installation of the new system image according to NVIDIA, bundles with proprietary NVIDIA drivers are included.

As a result, for system users with NVIDIA graphics chips, the proprietary drivers will be offered during installation, as well as the free Nouveau drivers that continue to be offered by default.

This new feature comes after work was carried out to increase launch stability by using NVIDIA's proprietary driver and optimizing performance and rendering quality on systems with NVIDIA graphics cards.

On the other hand, we can also find that the repository for this new version has stopped distributing packages for the 86-bit x32 architecture.

So, to run 32-bit applications in a 64-bit environment, compilation and delivery of a separate set of 32-bit packages will be provided, including the necessary components to continue running outdated programs that remain only in the form of 32 bits or require 32-bit libraries.

As for the exclusive news of Kubuntu, we can find that this new version provides the KDE Plasma 5,16 desktop environment version, with which all the novelties of this version of the environment are integrated in Kubuntu 19.10.

Such is the case of the integration of KDE 19.04.3 applications and the Qt 5.12.4 framework. Version in which we can highlight that the Dolphin file manager implements thumbnails for get a preview of Microsoft Office, PCX files (3D models) and e-books in fb2 and epub formats.

Items have been added to the context menu to add and remove tags. By default, the "Downloads" and "Recent Documents" directories are sorted not by file name, but by change time.

The video editor Kdenlive has been substantially redesigned, with changes affecting more than 60% of the code. The timeline implementation is completely rewritten in QML.

Another novelty of Kubuntu 19.10 is that in this version testing has been enabled for a Plasma session in Wayland. This is only possible by installing the plasma-workspace-wayland package on the system.

This will add a Plasma (wayland) session option to the login screen (which should be chosen by those interested in trying this session). Users who need a stable desktop experience should select the normal 'Plasma' option (without Wayland) when logging in.

For those who are interested in being able to download this new version of Kubuntu 19.10, they will be able to do it from the Ubuntu repositories, the link is this.

Since the official Kubuntu page has not yet updated the links to download the new version.