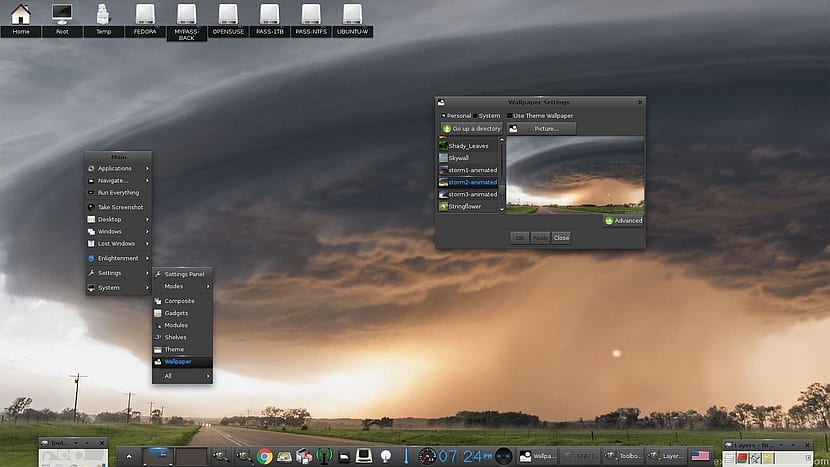 With the release of Ubuntu 16.10 comes a new edition of the distribution ExLight Live DVD Build 161016 and its Enlightenment desktop 0.20.99.0 to release a new set of new features on your system. Highlighting the new Linux kernel 4.8 recently released and the dynamic desktop backgrounds, ExLight Live arrives to make all its users fall in love again.

ExLight is about a light distribution Linux that emphasizes your desktop and system portability, and can be transferred to a USB key and run on any computer. Its suite of programs covers almost any general-purpose need and includes the latest drivers for an optimal experience with the latest components to be released.

Built with the beautiful Enlightenment 0.20 desktop, no improvement had been made since its previous version 0.19.12 and now one has been included that they hope will be to the liking of all users. Is about dynamic wallpapers, a feature previously exploited in other systems that is now present in ExLight Live.

The system It has been built based on the latest edition of Ubuntu 16.10 (Yakkety Yak) and Debian GNU / Linux 8.6 "Jessie", using the Arne Exton special kernel (4.8.0-21-exton), which is based on the recently released Linux 4.8 and uses both base distributions.

The latest Nvidia graphics drivers (owners, yes) for those users who have this type of graphics card. Regarding the set of programs we will find the classics of all distributions of general purpose such as the Libre Office office suite, SMPlayer, Google Chrome, GIMP, PCManFM, the Synaptic package manager, GParted and Wicd.

An interesting function that is introduced at the operating system level is the ability to use persistent sessions thanks to hybrid ISO composition, which allows us to save the changes if we dump the content of the image on a USB key type device. Likewise also it is possible to copy the system to RAM for a smoother and faster execution.

You can download the image in ISO format from the official website of the distribution in this same link.