Today was a day in which I had doubts and they were dispelled shortly after. Kubuntu consumes more power than Ubuntu and that's a bit pissed off. On the other hand, my laptop has problems that mean that every time I wake it up from sleep, pieces of the screen are black. While I have imagined going back to Ubuntu, I have remembered applications like Gwenview and have started to calm down. Soon after, KDE Community posted something that will arrive next to plasma 5.16 next month and my doubts have disappeared.

Scheduled for June, Plasma 5.16 will arrive with next generation Plasma notifications. It is a renewed system that has been in development, or rather in the mind of its developer, for years. Looking at the image that heads this post, we can already understand that the change will be worth it. For starters, new notifications will have a new designThe new version being more compact and with the icon on the opposite side to the one it is currently on, something that I think makes a lot of sense because in this way we will have the information more focused.

The font has also been improved and the header can be adjusted. But the makeovers aren't the only ones they'll introduce. They will also arrive persistent notifications that will remain on the screen until we accept or reject them. This will ensure that we will find out everything, or at least everything important that we have previously configured as such. Among these notifications we will have those of KDE Connect connection requests.

When the notification can be interacted with, the cursor will change to a pointing hand. Moreover, there will be a small bar on one side that will indicate the time remaining so that the notification disappears. As a Telegram user, this reminds me of how this messaging app manages the chats we delete, for example: it shows us a circle and a countdown. Plasma 5.16 notifications will do something similar, but with a disappearing bar.

What its developer likes best, and not surprisingly, is that Plasma 5.16 notifications will include a improved content previewas long as compatible software is used and the preview makes sense. For example, Spectacle shows a notification with the capture we just made, but the new version will show a background that will depend on what we just captured, as we see in the following image: 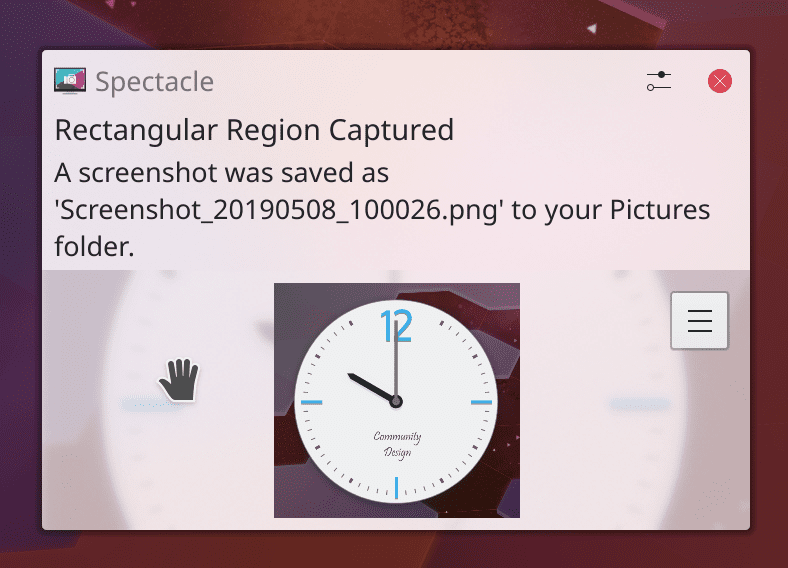 New Do Not Disturb mode in Plasma 5.16

This mode has been in many operating systems for a long time, especially mobile phones. In Plasma 5.16 it will also reach computers that are using operating systems such as Kubuntu. When activating the mode Do not disturb We will not see any notification windows and the sounds will be muted. We will not lose any notifications, but they will go directly to the history. But there will be different urgent events that will continue to notify us, such as the low battery.

Until now, progress bars were… well, it wasn't a progress bar. It is actually a filling circle that also shows the number of active processes. This appears, for example, when copying files. In the new version, these progress reports will be the same size as notifications, which will allow us to see the information more clearly. We will also see the time remaining to complete the operation.

When the job is done, the time will appear as exhausted and the notification will be like a normal notification. These progress reports will be more or less like what we see when we are downloading something in Firefox, with the difference that we will see it elsewhere and with the Plasma native design. 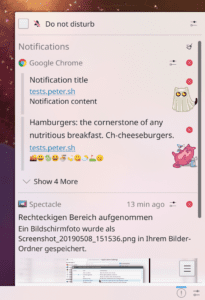 The new notification history saves all notifications and sorts them instantly. On the other hand, it will show less spam, that is, the notifications that we have already closed, interacted with, etc., will not be added to the history.

All of this would be more difficult to manage without new notification settings that will also arrive with Plasma 5.16. In these settings we can:

What are you most looking forward to trying out of this new notification system?