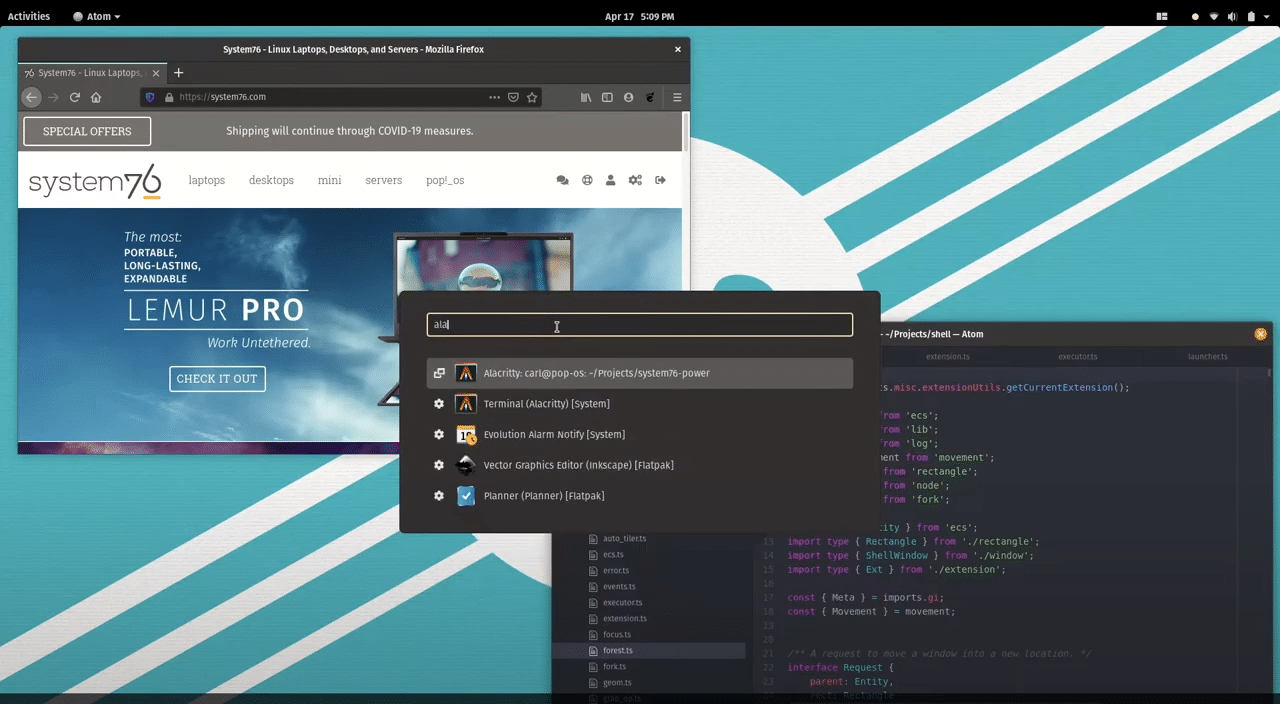 System76 developers (a company specializing in manufacturing laptops, PCs, and servers that ship with Linux) announced the launch of the new version of your Linux distribution "Pop! _OS 20.04 ”, which is being developed for delivery on System76 hardware instead of Ubuntu (previously offered) and ships with a redesigned desktop environment.

This new version of Pop! _OS 20.04 llegacy based on Ubuntu 20.04 (which introduces many of the features that Ubuntu 20.04 has) and is also advertised as a long-term support (LTS) release.

Pop! _YOU comes with a modified GNOME Shell, an original skin by system76-pop, your own icon set, other sources (Fira and Roboto Slab), modified configurations and an expanded set of drivers.

The project is developing three extensions for GNOME Shell: "Suspend button" to toggle the shutdown / suspend button, "Always show workspaces" to constantly display thumbnails of virtual desktops in overview mode, and "right click" to view detailed information about the program when you click the icon with the right mouse button.

The distribution is mainly aimed at people who use a computer to create something new, for example, involved in content development, software products, 3D models, graphics, music or scientific works.

For new installations, se uses a dark desktop theme by default (which can be activated manually for those who upgrade from a previous version) plus a light theme is offered in the configurator in the section with appearance settings.

Were implemented full capabilities to navigate the desktop using the keyboard without using the mouse. Using keyboard combinations, you can also launch applications, switch between programs, and quickly change settings. In addition to the default hotkeys, you also it offers a navigation mode in the Vim style as an alternative. To see all hotkeys in the top right menu, add the item "See all shortcuts".

The automatic window tile rearrangement mode is implemented after opening the application. You can adjust the position and size of the window using the keyboard without touching the mouse. The mode is activated through the system menu.

Have been added virtual desktops that allow you to collect related content and separate active applications that are not related to the current workflow in a separate space. You can use the keyboard to switch between virtual desktops and move windows on them.

Added support for Flatpak and the Flathub catalog to the install interface of the Pop! _Shop

In addition, they worked for simplify work on hybrid graphics systems and on the render switch that uses the integrated Intel graphics card or the NVIDIA discrete card, the hybrid graphics mode has been added to the system menu, in which the laptop runs most of the time using Intel's low-power GPU and switches to the more powerful NVIDIA discrete GPU only for certain applications.

When starting a program separately, you can also select "Start with dedicated graphics card" in the context menu to use the NVIDIA GPU. Application developers and add-on packages can also select a discrete GPU.

The section Firmware has been added to the configuration, Through which you can update the firmware of hardware components with just one button, not only for System76 equipment, but also for any other vendor that releases updates via LVFS (Linux Vendor Firmware Service).

And also stands out a panel applet that uses flags to quickly access settings from apps like Slack, Dropbox, and Discord.

In order to obtain this new system image and install this Linux distribution on your computer or you want to test it under a virtual machine. You just have to go to the official website of the distribution and in its download section you can get the image of the system.

Finally, you can make use of Etcher, which is a multiplatform tool to save the system image to a USB.