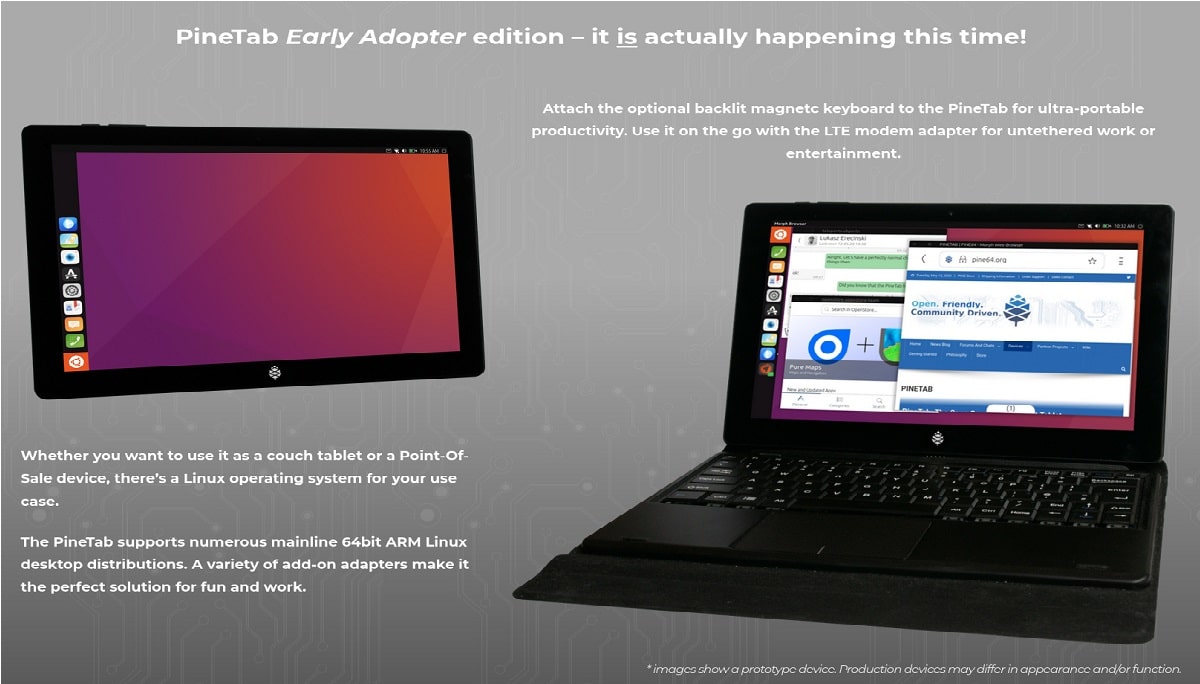 Ten days ago my pinetab. After no less than three months of waiting, I was finally able to turn it on and test Ubuntu Touch and its Lomiri for myself. It has been two weeks in which I have (we) carried out a lot of tests, and personally I can only think of one thing: that please, the developers and PINE64 do not abandon this and future projects because things are promising, especially thanks to how easy it is to test operating systems.

And yes, it is true that we are not facing an iPad, with its aluminum, perfect construction, resistant panel glass and an application store like the App Store, but it does not intend it either. The PineTab looks more like a PC: it comes with an operating system, but we have the possibility of installing others in the internal memory or starting them from a microSD, where we will have a complete system (not Live). And to be honest, although almost all of them are in the alpha phase, things are promising.

The best of the PineTab

As we have just mentioned, the best thing about this tablet is that any adapted version can be installed in the internal memory or run them from a microSD. That allows us, if we want, to leave Ubuntu Touch as it is and install Arch Linux ARM on a card. I mention Arch Linux because right now my installation allows me to:

Lomiri, the best interface, but the most limited

As you can see in the video, Lomiri is the best. Phosh (PHOne SHell) is based on GNOME, and was designed primarily to work on mobile phones. In fact, Mobian, Arch Linux y Manjaro, three of the systems that already have an image for the PineTab, start vertically and we have to manually put it horizontally (Mobian) or wait for it to make the transition (Arch). On the other hand, Ubuntu Touch already starts horizontally, and the welcome screen is much more visual than those used by Phosh. The gestures are also much better and it automatically goes from the tablet version to the desktop version if we put or remove the official keyboard.

The problem is not lomiriBut Ubuntu Touch. If we stick with the previous video, we see that it works, right? But it has a trick: I did not launch some heavy apps. The browser is a bit slow and apps based on it can be exasperating. This is something that also happens in other systems, but Arch or Mobian allow us to install native applications such as Cawbird with which we can consult Twitter in a much more fluid way than in the web version, or install the webapp with Epiphany that works a lot better than entering from a full browser. And that, coupled with that Libertine it doesn't work, it's the worst thing about the tablet ... for now.

The worst, for now

The worst thing that I have experienced on the tablet are web browsers. It doesn't matter if we use Morph, Firefox or Epiphany; they are all very slow. In part, this is because changes have to be made to take advantage of all the hardware inside the PineTab, such as allowing us to enjoy things like hardware acceleration. Therefore, we are going to have to be patient if we want everything to be perfect.

Because no, this is not a promotional item nor do I want to paint it all pink. Right now, things are far from perfect, because in all systems there are things to polish, but it is a bit impressive to be able to use a lot of what we use on a PC on a tablet with a touch screen like the PineTab. Things will get better, but keep in mind that what is now available is the Early Adopter version, which means that it is still in development.

But hey, it seems that the community is very active and tests are already being carried out to be able to use different graphical environments, such as Plasma Mobile. Many of us agree that the best thing would be to be able to use Lomiri on a fast and functional system like Arch Linux, and the possibility of seeing it in the future is not ruled out. The only thing I am sure of is that, if they do not stop, the future of tablets with Linux promises.

Full path to article: ubunlog » General » Hardware » Ten days with the PineTab: first impressions with the tablet that aims to change the rules of the game