It is no secret that there are countless Linux distributions. Counting only Ubuntu and all its official flavors, we have 10 available distros, and that's not counting all the unofficial ones. I remember several years ago when I installed Ubuntu Studio as the main system, a distribution that is designed for musicians and for creating multimedia content. And, although we are already a little late for «back to school», an official version is also available for students. In this article we are going to put this official version for students face to face with another Ubuntu-based distribution that has a lot to say in this regard: Edubuntu vs. UberStudent.

Both systems they are based on Ubuntu, so there are very few differences inside. The differences are in other aspects such as the installed programs, how everything is organized or the image. There is also a difference in performance between the two systems, but it is not something that we are going to notice too much if the computer is not a small laptop.

Both distributions install in a simple and similar way. Just have to download the ISO of one of the versions (from HERE Edubuntu's and from HERE UberStudent's), create an installation pendrive (recommended) or burn it to a DVD-R, start the PC in which we want to install it with the DVD / Pendrive placed and install the system as we would with another version of Ubuntu. In general, any computer reads the CD first and then the hard disk, so if our choice is to use a pendrive, we will have to change the boot order from the BIOS. In both cases we can test the system or install it. 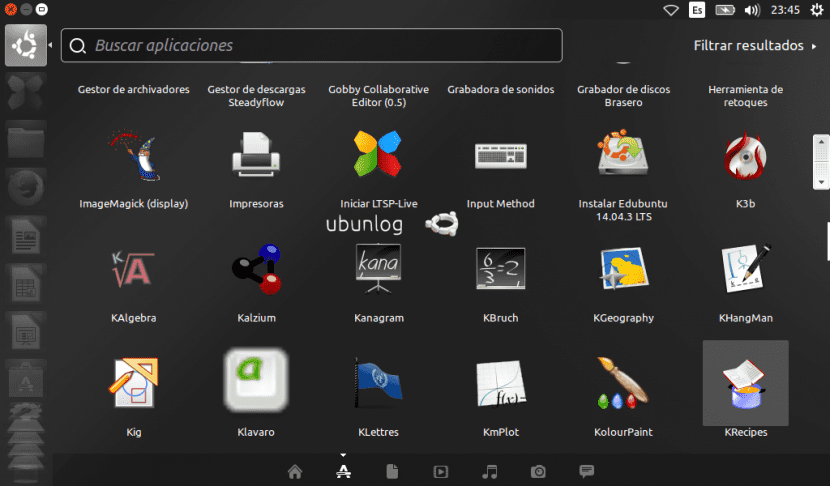 Both distributions have a good number of educational programs installed by default. When we download the disk images, the approximately 3GB of both ISOs already makes us think that we have not downloaded a simple distribution. If we browse between the education applications of both systems, we can see that Edubuntu has more programs pre-installed than UberStudent. In fact, UberStudent links us to some websites as if they were programs. I prefer that the programs, education in this case, are installed by default, but I understand that not all of us will think the same. Anyway, whoever does not agree with me and one day is left without a connection that allows them to consult the information, will tell me. 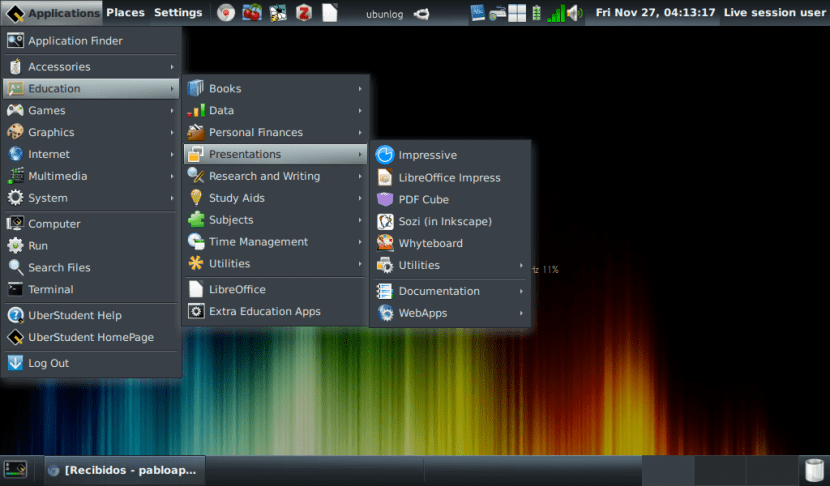 It is important to mention some programs that Edubuntu has that UberStudent does not have, such as KAlgebra, Kazium, KGeography or Marble. Instead, UberStudent has a smaller collection, but includes some tools for editing texts that Edubuntu does not have. Ultimately, Edubuntu includes more programs that provide a lot of information to students and UberStudent includes more tools that can help study, but without providing this information. I think Edubuntu is better for science and math students and UberStudent is more focused on users who prefer texts, especially to write them.

All applications, logically, have to be organized in some way. It is useless to have many applications if we are not able to find them (as has happened to me when I have used a version of Linux Mint). For newer users, exiting Windows to enter Linux can be quite confusing, especially because of not knowing the names of the applications (as my brothers did when they took my computers).

In this sense, Unity is not that it has the hidden applications, but the way to show them from UberStudent is much more natural and intuitive, as you can see in the previous section. In Unity it can be more difficult to find applications that are sorted by more general categories. This is exactly what happened to me the first time I used it: I didn't know where to look. That has not happened to me in the other graphical environments. In short, it is not that one shows it much better than the other; is that the other shows it less well. 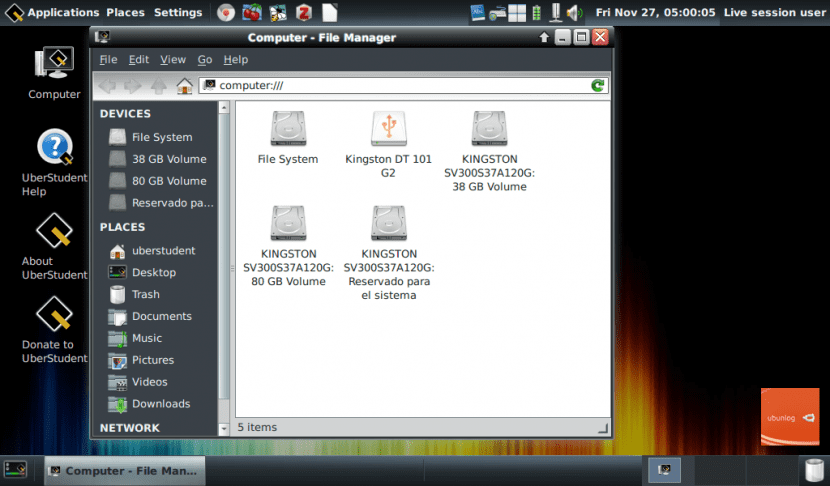 UberStudent uses environment xface, allowing it to function better on less powerful computersBut this comes at a price that we will pay in a less attractive image. Something that was obvious in previous versions were the minimize, close and restore buttons. They were in different colors and it didn't quite look good. But, as you can see in the previous screenshot, this is something that has changed in the last version and only the button to close the red windows remains.

It seems important to mention that in a Live Session UberStudent does not have a Spanish language. You have to install it. 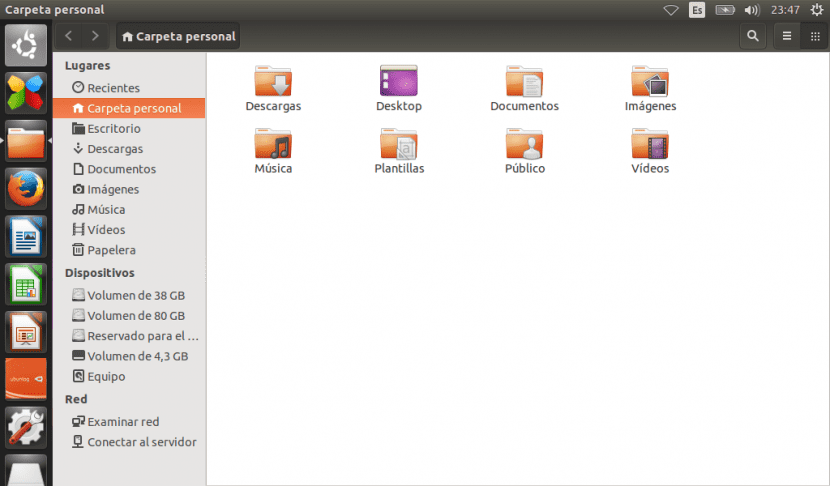 On the other hand, Edubuntu maintains the environment Unity in full that uses the official version of Ubuntu. Unity, which has been heavily criticized by many users (including myself) since it first arrived in Ubuntu 11.04, may feel a bit strange the first time we use it, but it is much more attractive than almost any environment, including Gnome (the one I usually use, specifically Ubuntu Mate). The main problem with Unity is that it performs a little worse on low-resource computers, but it is visually very attractive.

To the points, Edubuntu wins 2-1. Nor is it something that should surprise us, not in vain are we talking about a official flavor Ubuntu against one that is independent. Once we get used to using the system, Unity is much more beautiful than Xface and all the applications available in Edubuntu make us give it the champion belt on its own merits.

Anyway, being free systems and easy to install, it is best that you try both systems to see which of them best suits your needs. If you have, which of these two distros do you like the most to study: UberStudent or Edubuntu?

Full path to article: ubunlog » Ubuntu-based distributions » Edubuntu » UberStudent vs. Edubuntu. In search of the best distro for students

🎁 Until 50% off in computer science and technology