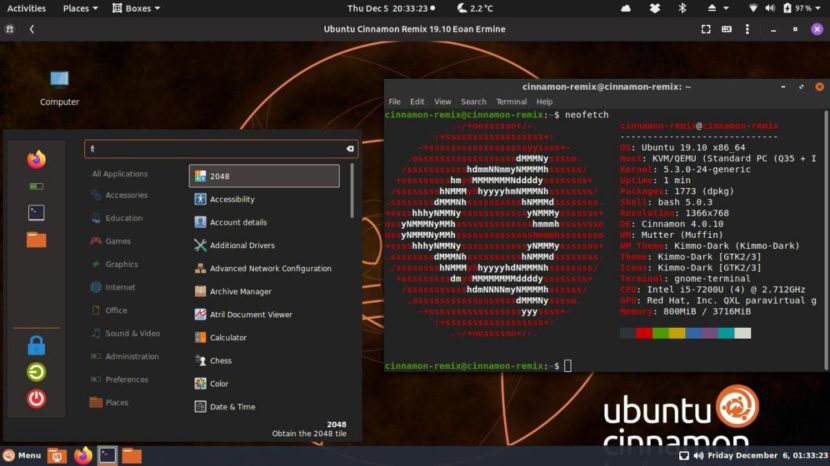 A couple of months ago, a server discovered something that was not being talked about enough: they are working on a new version of Ubuntu that, if nothing happens, will end up being the official flavor of the Canonical family. Its name will be Ubuntu Cinnamon, but the project will be called Ubuntu Cinnamon Remix until it fully enters the family. Today the news is that they have already released the first stable version of Ubuntu Cinnamon 19.10 Eoan Ermine.

This has been announced on the social network Twitter, where we have available the image that heads this article and links to all related information. The launch of the stable version has arrived just over a month after the first trial version and immediately after the beta, so we could say that either they have been in a great hurry or what is available is a very early phase image closer to a beta 2 than a stable release. In any case, these are reflections of the editor of this article that may not be true.

Related article:
Ubuntu Cinnamon Remix already has a website. There will be an unofficial version in April

Ubuntu Cinnamon 19.10 Eoan Ermine is now available to the public!

Thank you all to those who contributed, supported us, spread the word around, and join us as we step forward to @ubuntu flavorship. It isn't easy.

Ubuntu Cinnamon 19.10 Eoan Ermine is now available to the public. Thanks to everyone who contributed, supported us, spread the word, and joined us as we move towards @ubuntuflavorship. Is not easy. Download here: https://sourceforge.net/projects/ubuntu-cinnamon-remix/

Some of the most interesting facts about what Ubuntu Cinnamon 19.10 brings are in the release notes:

Also, they are working on other features that will be available in Ubuntu Cinnamon 20.04 Focal Fossasuch as a welcome screen for the first time the operating system starts up or organizing that some software has been copied and hosted where it shouldn't.

Interested users can download the first stable version of Ubuntu Cinnamon 19.10 from the link that appears in the tweet above these lines. Personally, and this is something I do for any operating system, I would recommend trying Ubuntu Cinnamon on Virtualbox or GNOME Boxes before doing a native install. If everything goes as you expect, you can try to install it as native or wait for the April release, which will be even more stable.

What will you do: can you wait or are you going to install Ubuntu Cinnamon 19.10 Eoan Ermine now?