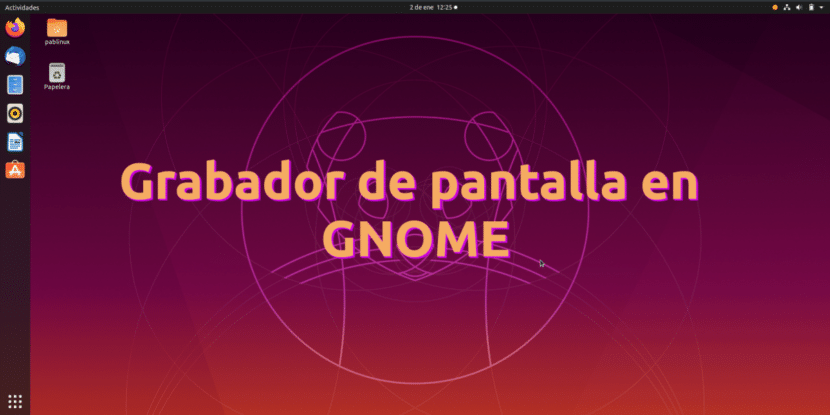 The reasons for recording our desktop screen can be many and varied. Here at Ubunlog we have written many articles related to this, but some of them are obsolete because the developer stops offering support or something similar. This is somewhat more difficult if the screen recorder it is integrated into the system or, in this case, the graphical environment, so we could say that Ubuntu will always have one available.

At least at the time of writing this article, GNOME offers us the possibility of recording the screen without having to install extra software such as SimpleScreenRecorder, although it is a basic screen recorder with some shortcomings. It is integrated into the system as is Windows 10, which for me would be the best recorder of any operating system if it weren't for the fact that it only allows us to record individual windows and not the entire desktop.

How to use GNOME's built-in screen recorder

It is a bit strange that a function like this is "hidden". Project GNOME does not promote it as it should, so it is little known. It can be launched with a simple keyboard shortcut, which would be Ctrl + Alt + Shift + R (R for Record = Record). As soon as we press the shortcut, we will see a red point at the top right, in the system tray, like the one you have in the image that heads this article and that I have forgotten to point out.

The problem with GNOME's built-in screen recorder is that it has some restrictions that prevent it from competing with other specialized software such as the aforementioned SimpleScreenRecorder or Kazam:

Another restriction is the recording time. By default, pressing Ctrl + Alt + Shift + R will start recording and it will stop automatically after 30 seconds. We can also stop the recording if we repeat the shortcut, but to record more than 30 seconds we will have to make a change. We will write this command:

The above command will increase the maximum limit from 30 to 300 seconds. Logically, if the tutorial we want to record exceeds 5 minutes, 300 seconds will not be enough either, so I personally recommend using the value 0 to eliminate the limit; when we want to stop recording, we will use the shortcut (Ctrl + Alt + Shift + R) a second time.

Related article:
Vokoscreen, a simple program to record videos from your desktop

Although this article is not about that, I think it is worth mentioning some alternatives, all available from the official repositories:

Which option is your favorite to record the screen in GNOME?

Full path to article: ubunlog » Desks » Gnome » Ubuntu has a basic and hidden screen recorder installed by default. We tell you how to use it