I must admit that I am the first surprised to learn that it is a question that many users have. The surprise is reduced a bit if I take into account that there are several ways to have Firefox on Linux, existing, at least, APT, Snap versions and the binaries. With this in mind, I have decided to write an article that any user who is clear about it has to stop reading from now on, since we are going to explain how to update firefox on Linux.

Next I will explain how to do it in the 3 ways that occur to me depending on what version we have installed on our Linux PC. From 2015-2016 we have new types of packagesNot to mention that there is the possibility of updating Firefox ahead of time with the binaries or we can use the same to update a beta version. You have everything you need to know after the cut.

How to update Firefox in its APT version

The vast majority of users will have the APT version of Firefox installed. What is the APT version? This is the version that is installed by default in Ubuntu and many other operating systems. This version comes with the main software and some dependencies that will depend on the operating system that we are using. In addition, as not all the software comes in the same package, its image will vary depending on the graphical environment that we are using. RIGHT NOW is the version I use and I recommend that you use all those who read me.

Updating it is so simple that it has no loss. But one thing must be taken into account, and this could be the reason why some users have doubts: the APT version is not available at the same time that either Mozilla or we publish that there is a new version. If we have the APT version installed we will have to wait a while for the new version to be added in the official repositories. Firefox 66 hit the APT repositories two days after its release and here's what to watch out for.

To update it we will do the following:

This will be in the event that we are in a rush to install it. If we don't do it manually, sooner or later we a notification that we have pending updates will appear, at which time we have to accept to install the new version of Firefox and all available updates.

And in the Snap version?

This question is already a bit more complicated RIGHT NOW, and I'm rewriting this in uppercase. And is that right now Firefox in its Snap version does not offer updates as it should, that is, from the "Help / About Firefox" options, from where we should see that there is a new version and accept it to update. A message should also appear warning that there is a new version as soon as Firefox starts, but this is not the case (right now it offers us a link from where to get the binaries). I think it's important to make it clear that this will be the way to do it if you read this post within a time when Mozilla decides to enable this option.

Before continuing: What is the Snap version? Is about the version that is available in the Snappy Store and is different from the APT in:

If we want to know how to update Firefox in its Snap version today (April 2019), say that we have to do it as in its APT version, following the same steps. If the update does not appear directly, we can also search for "Firefox" in our software center, where two versions will appear, the APT and the Snap, we enter the Snap and see if it says "Update". If so, we update from there. To know what version it is we have to look at the details of Firefox, which are below the information of the program. 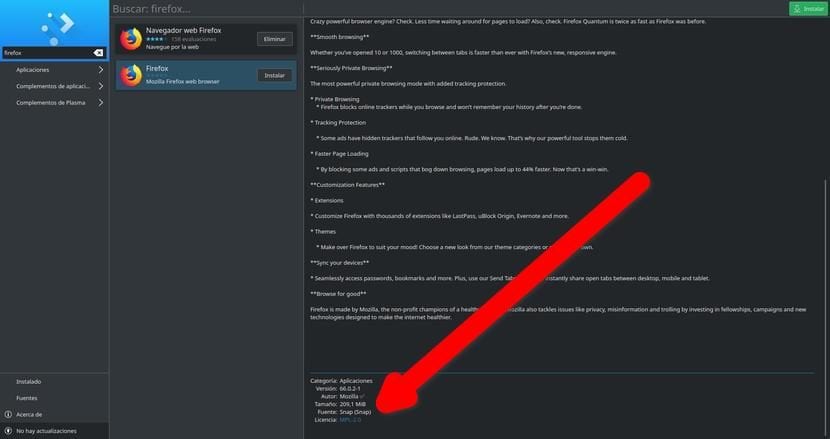 Another option is to go back to ewrite «sudo snap install firefox«(Without the quotes), at which point it will tell us that we already have it installed and will suggest us to use the correct command, which is "Sudo snap refresh firefox", also without the quotes.

Needless to say, they have finally updated the Firefox Snap package in the Snappy Store. It was stuck in v65.xx for a long time when those of us who had the APT version were already enjoying all the benefits of Firefox 66. Without a doubt, all this will improve in the future.

If you are wondering how to update Firefox in its Flatpak version, at the time of writing these lines does not exist. At the moment it exists, if it is the case, the update system will be the same as in its Snap version, that is, via push or from the software center. The most common will be push updates.

Are you wondering how to do it on Windows or macOS?

I understand that many of you think that this part is over in Ubunlog, but we are here to help and maybe there are Windows and macOS users who don't know how to update Firefox. In Windows and macOS, a system similar to how Snap and Flatpak packages should do it is used, that is, a notification should appear warning that there is a new version. If we see such a notification, we will:

How to update Firefox Beta from its binaries

And whoever says "Beta" also says an official version on the day of its launch. The only thing is that I honestly do not recommend it; I don't see a real need to "play" with the binaries if we are going to have an APT version available soon. That is why I mention that it is better if we do it in a beta. Upgrading from binaries is easy and you just have to follow these steps:

If we update a version from the binaries, the theory says that when there is a new version it will read the information from them and offer it to us as if we had updated from the official repositories, but one thing is theory and the other is practice. . I comment on the theory, but I do not like to state emphatically something that might not be fulfilled.

UPDATED: binaries, at least as of Firefox 67, are updated from the same browser as in Windows and macOS.

How to install Firefox Beta

To cover all the possibilities, now that we talk about the beta version, we can update it the same as the APT version, but for this we will have to add the beta repositories from Firefox. Keep in mind that if we do, we will always be updating from beta to beta, but for those who are interested, we will do it with these commands:

Once the previous commands have been written, we can treat the beta the same as the APT version that we had installed by default. This I would only recommend for developers.

I hope I have solved all the doubts that users had about how to update Firefox. Those of you who did not have it, understand that not all users know how to do everything, especially now that the Snap version exists and that blogs such as where a server writes, we publish the new updates just at the moment in which Mozilla announces them.

Has this article helped you?

Full path to article: ubunlog » Ubuntu » How to update Firefox on Linux: APT, Snap or binaries