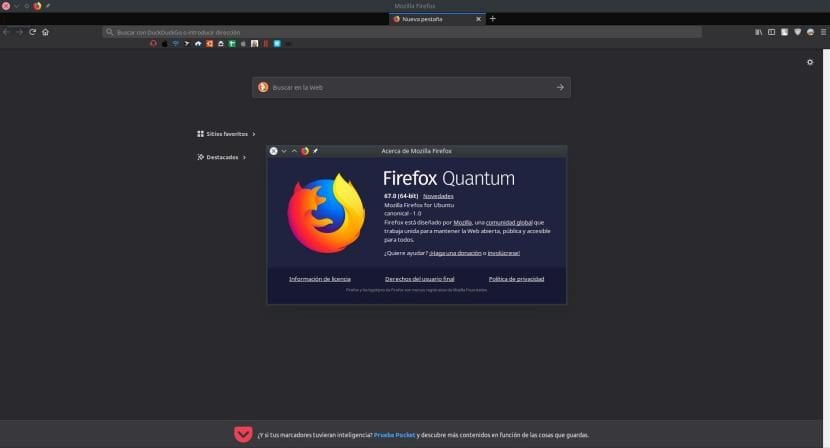 They have been in a hurry, so much so that I don't remember such a quick update: Firefox 67 is now available in Ubuntu's default repositories and its official flavors. The day of its launch has arrived, so one gets the impression that they had it prepared and talked to Canonical so that it would be available on the day that was marked on the calendar. The new version comes with many new features, explained here!, but the one that attracts the most attention is WebRender, just the one that will not be available to all users from today.

As we can read in the list of news, the first to enjoy WebRender will be the users whose computer is running Windows 10 and your graphics card is from Nvidia. The rest will still have to wait and it is unclear to 100% even when. There are two possibilities: the first and most likely by far is that they activate it remotely and the second is that they activate it coinciding with a software update. In any case, we can check if we already have the option activated by following the simple steps detailed below.

Check if WebRender is available from the support page

If we want to know if we have the new rendering engine active, we have to:

Try typing about: support in the URL bar and searching for WebRender, it should show up when enabled! pic.twitter.com/95yVwKjU9F

This system to check if we have it active works for Windows, macOS and Linux. Mozilla has planned that 50% of Firefox users (on computers) have the option activated on May 30th. Right now, the devices that are enjoying WebRender will be approximately 4%, going to 25% on the next day 27. The remaining 50%, where we will probably be Linux users, we will receive from on May 30, as long as they check that everything works correctly.

Although most of our readers are Linux users, the question is obliged: have you already managed to verify that WebRender is activated in your Firefox? How's it going?

Full path to article: ubunlog » Ubuntu » WebRender, how to check if it is activated in Firefox on Linux, macOS and Windows