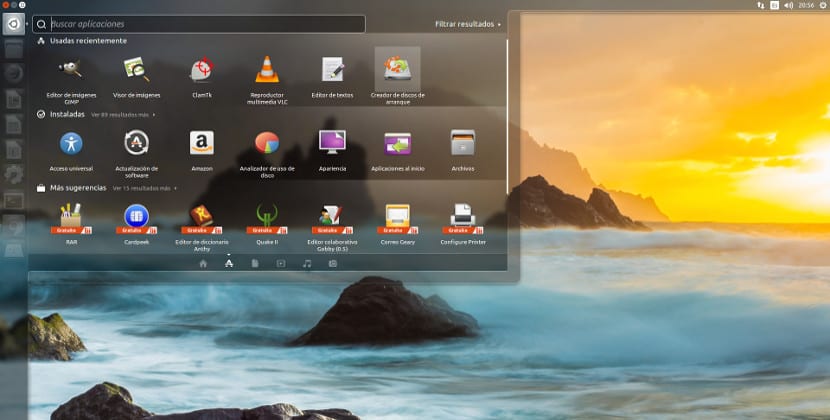 Many those who have recently landed on Ubuntu will look in documents and web pages for allusions to a certain "Dash", although the name does not give much idea of ​​what it may be. Dash or also known as «Tablero» in Spanish is the button that Ubuntu has with the Ubuntu logo at the top of the Unity launcher. It works the same as the Windows Start button and after pressing the button a window appears in the upper left part of the desktop with the applications and documents of our system.

The Dash is made up of three parts: the first part is a search engine where we can search for the applications or documents that we want; the second part shows the documents that our system has and the third part is made up of five icons that are at the bottom of the Dash.

The Dash browser has long been a source of trouble for Ubuntu. Its standard settings allow us to allow certain searches to return results from the Web, which sometimes compromises our privacy. However, in the program Settings we can change all this. The second part, the results will vary depending on the icons at the bottom.

The icon of the little house will show all results that is on our computer and on the Web. the letter A will show us all the applications matching search or all apps simply. The following icons will show all the text documents of the computer, the videos, the images and the music, all segmented and ordered correctly.

How can you see the Dash is easy to use, it is also a simple and basic tool but that novice users tend not to use much due to the Unity launcher. In spite of everything, in the latest versions not only has the corresponding tool to limit the results been added, but a tool has also been added to filter results, as well as the large search engines, which makes the use of Dash easier.

Dash is a simple tool that seems to stay in Unity for a long time, although as time passes, the novice user stops using it to use faster ways like terminal or the launcher icons. What do you use?

Full path to article: ubunlog » Desks » Unity » What is Dash?