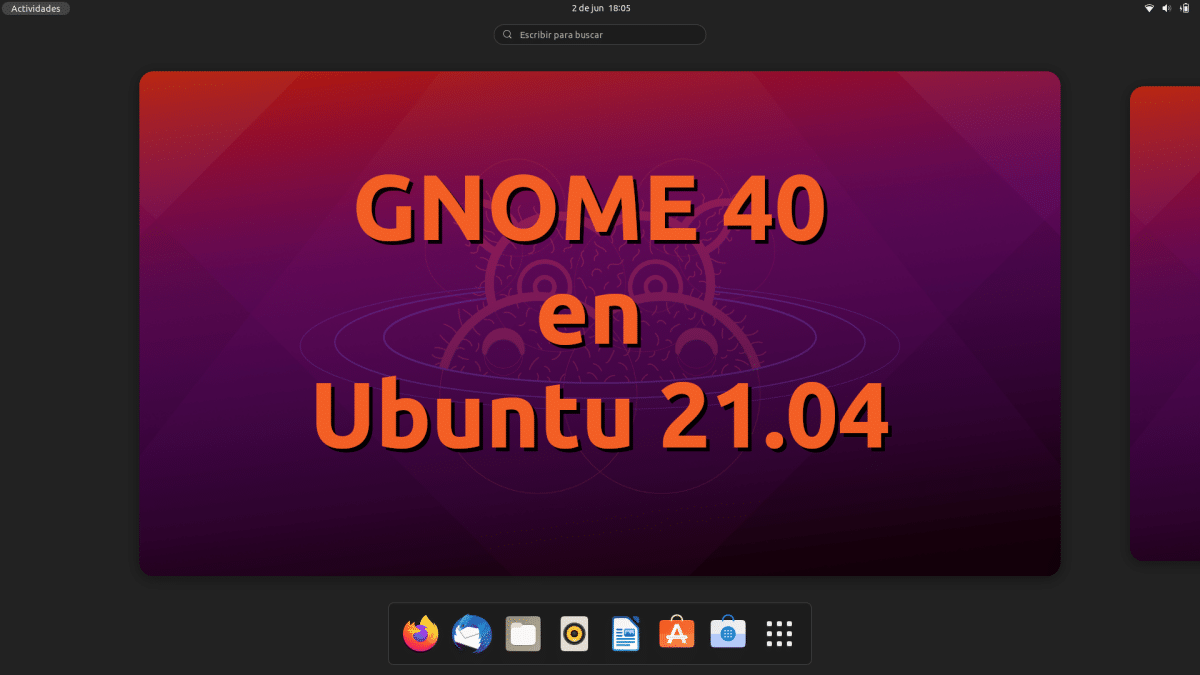 I've been testing for a few days GNOME 40. I am doing it in USB with Manjaro GNOME persistent storage in which I have changed the branch to use the Unstable option, that is, in which the new packages are added first. I move very comfortable in KDE, and much to blame is the feeling of fluidity and the applications / functions of the desktop, but GNOME is used a lot because it is what Ubuntu and Fedora offer by default. Hirsute hippo stayed in GNOME 3.38, but there is already a way to make the leap.

This tutorial I have found in Linux uprising, where they also explain how to add a dock (spoiler: installing Plank), and from it the most important thing is to add a repository that contains the new GNOME 40 packages. The repository is not official, that is, Canonical or anyone related to the company is behind this, so we have to be especially careful. At this time I am going to do the same as Logix, the author of the article on which I have relied, and advise that we may run into compatibility issues, so it is not recommended to go up in a main team, but in one to test. We will also say how to revert the changes, but that said, what better to try in an installation that we do not depend on.

Before continuing, we continue with the warnings, like that DING or the extension for the Ubuntu Dock will not work after updating, and this will mean, for example, that we will not be able to move files from / to the desktop again. Nor will we be able to access the Appearance section of Settings.

If you still want to go ahead, something that I have done on a persistent USB to check that it works, you just have to follow these steps:

How to use the new gestures

In my opinion, the best things about GNOME 40, performance aside, are his gestures. Now, with three fingers up, we will see the dock and the activities, that is, the virtual desktops. If we slide a little more up we will see the applications. Once in this view, with three fingers to the left / right we go from one activity to another, while with two fingers we will move through the different pages of apps. For the latter, it is necessary that we have a minimum number of applications installed, at which time the newest ones will appear on another page.

If you do not want to use gestures, and I already tell you that they are fluid even on a computer like my Lenovo that does not have the best touch panel in the world, you can also access all this with the keyboard: the Super (META) key shows us the dock and activities, something that we also get with Super + Alt + Up. I think only the Windows key is more comfortable to enter this view, but if we use Super + Alt + Up again we will enter the application drawer. We can also add right or left to move through the activities.

How to undo the changes

If for whatever reason we want to undo the changes, what we have to do is write these commands:

If we have updated Yaru, we must also enter the following:

GNOME 40 is a major leap in quality, so I think it's worth a try at least. It was rumored that there would be an official way to come up with a backport that they would do, but that hasn't happened yet. If in the end they don't, Ubuntu 21.10 will arrive with an updated version of the desktop, although it is expected to be GNOME 41 already.