Recently the guys in charge of the development of GIMP have announced the new stable version of this great software, because this free and open source image editing application GIMP has a new release GIMP 2.10 arriving six years after the last major version 2.8.

It won't be an exaggeration if I say that GIMP is the most popular image editor in the Linux world and perhaps the best Adobe Photoshop alternative, because after so many years of development it has achieved great acceptance by the Linuxera community.

With this, it has managed to position itself in one of the image editing applications that can be found in almost all the repositories of Linux distributions.

Even though it has been updated to a new version, GIMP will continue to make use of the GTK2 libraries. GTK3 is expected to be used for GIMP 3.x, coming at a different time.

GIMP 2.10 has been ported to the GEGL image processing engine and that's the biggest change in this version. Introduces several new tools and enhancements.

Some of the main highlights of this release are: 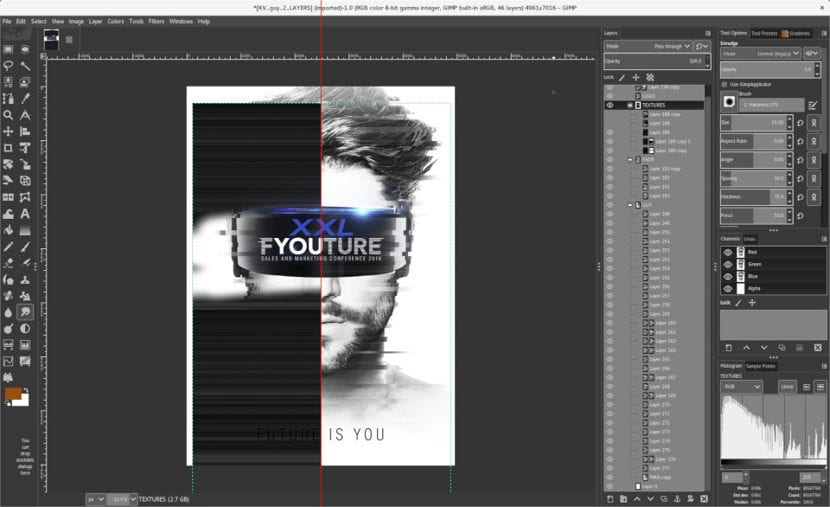 As has been said, GIMP is found in the repositories of almost all Linux distributions and Ubuntu is not the exception, but since new versions of applications are not usually updated as soon as possible, at this time we will find a previous version in the Ubuntu repositories.

But don't worry, we have an alternative to enjoy this new version. We will support each other with the help of Flatpak.

The first requirement to install GIMP from Flatpak is that your system has the support for this, If that is not the case I share the method to add it.

The first thing we will have to do is add Flatpak to the system, for this we must add the following lines to our sources.list

We can do this with our favorite editor, for example, with nano:

And we add them at the end.

Or also we can add it with this simple command:

Y we finally installed with:

We must remember that now in Ubuntu 18.04 LTS the apt update step was eliminated, only when we add repositories.

Already installed Flatpak in our system, now if we can install GIMP from Flatpak, we do this by executing the following command:

Once installed, if you don't see it in the menu, you can run it using the following command:

Now If you don't want to install GIMP 2.10 with Flatpak, there is another installation method and this is by downloading the source code of the application and compiling it yourself. For this we only have to download it from the following link.

If you don't prefer any of these methods, then you just have to wait for GIMP to be updated within the repositories to be able to install it from the Ubuntu Software Center.

It only remains to start enjoying this new version of GIMP in our newcomer Ubuntu 18.04.