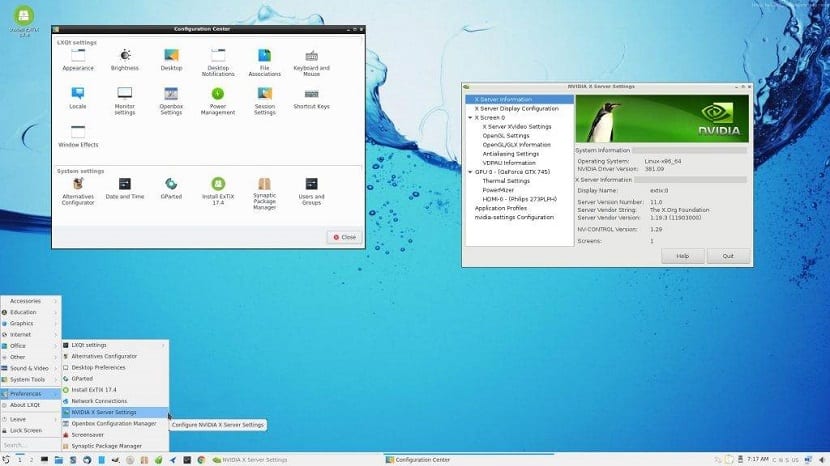 ExTiX is a free and open source distribution from GNU / Linux based on Ubuntu 18.04.1 (Bionic Beaver) and Debian 9 (Stretch) operating systems, built around the minimal and very lightweight LXQt desktop environment, which is written in the Qt programming language.

This is a Linux distribution based on Ubuntu and has a variety of desktop environments under its hood Among which we find Budgie, Deepin, KDE and LXQt.

About the Linux ExTiX distribution

The distribution It is powered by the latest Linux kernel 4.18 and includes a wide range of useful open source applications.

The ExTiX project is designed to be used by end users who need a modern and practical desktop system for their daily tasks.

Unfortunately for some of you, OS only supports 64-bit CPU architecture, mainly because it is designed to be used in high-end computers.

Therefore, if this is a problem for you, we suggest that you search our website for another Linux operating system that supports 32-bit hardware platforms (for low-cost computers).

Being based on Debian, uses a DEB package manager, therefore, you will have no problem finding packages compatible with this distro, since DEB abounds.

ExTiX is a Swedish GNU / Linux distribution that uses its own kernel that transfers reliability, performance and robustness to it.

The kernel variant is called EXTON and it has been specially compiled to provide the system with robustness and efficiency.

LXQt is the Qt port and the next version of LXDE, the lightweight desktop environment.

It is the product of the fusion between the LXDE-Qt and Razor-qt projects: a lightweight, modular, extremely fast and easy-to-use desktop environment.

This new version of the distribution arrives with Kernel 4.18.5-exton corresponds to the latest stable kernel from Kernel.org 4.18.5.

It is also important to mention that in this version of the distribution WiCD was replaced by Network Manager. ExTix in this new version offers us a lighter, more powerful, sophisticated, modular and easy-to-use system.

And within the utilities that we can find in this new release are the latest updates to LibreOffice, Thunderbird, Gparted, SMPlayer, Brasero, GCC, etc., as well as all the necessary multimedia codecs so that an average user has no problem starting to operate the system.

De The new changes and features that we can highlight in this version can be found:

Si want to download this new version of the distribution, they will only have to go to the official website of the project and in their download section they will be able to obtain the download link. The link is this.

This distribution it can be used in live mode without the need to install anything on your computers.

To do this, they should only use the system access credentials, which are the following: