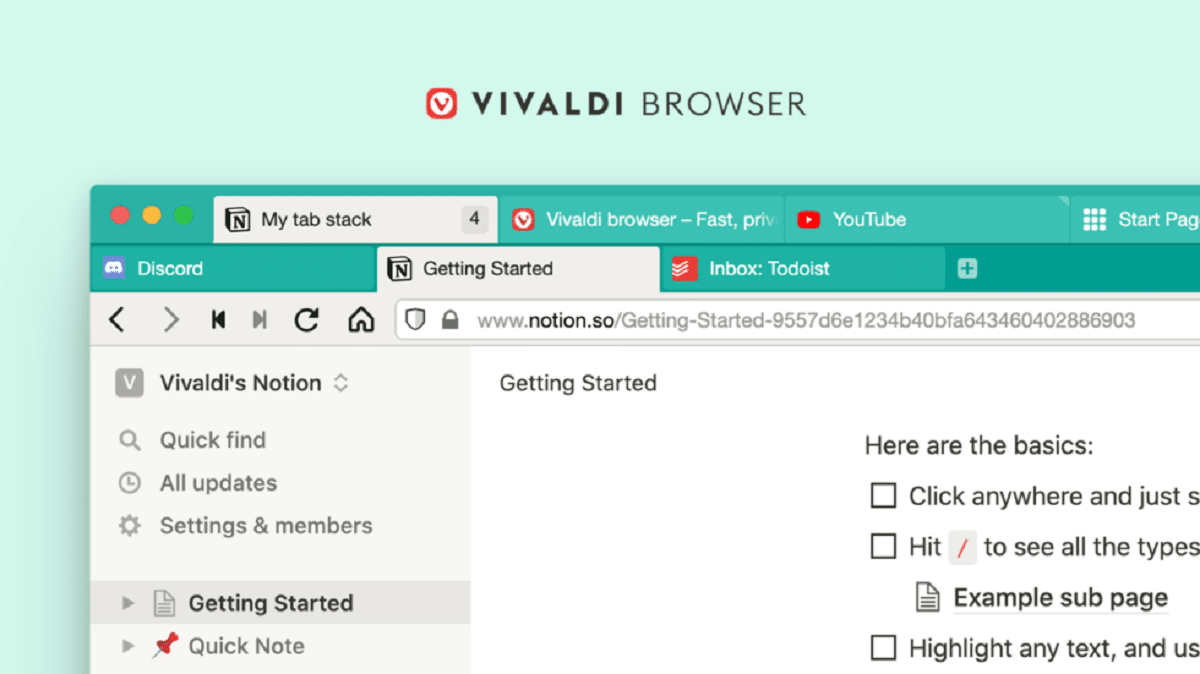 Vivaldi Technologies developers unveiled the release of the final version of the web browser Vivaldi 3.6 which has updated the base of the Chromium engine to version 88.0.4324.99, in addition to that it comes with some quite important changes, such as the ability to have a second tab bar which can be manipulated, improvements for contextual menus and more .

For those unfamiliar with the browser, they should know whate is being developed by the forces of former Opera Presto developers and aims to create a customizable and functional browser that preserves the privacy of user data.

The main features include that it is based on the Chromium engine and has a ad and tracking blocker, note managers, history and bookmarks, private browsing mode, encrypted end-to-end sync, tab grouping mode, sidebar, configurator with many settings, horizontal tab display mode and test mode built into email client, rss reader and calendar.

The browser interface is written in JavaScript using the React library, the Node.js framework, Browserify, and various out-of-the-box NPM modules.

In this new version of Vivaldi 3.6 we can find that the browser has updated the Chromium engine to version 88.0.4324.99.

Furthermore, it is mentioned that work with tab groups has been improved significantly, since now an additional tab bar is automatically activated to display the pages included in the group, which makes working with tabs more convenient and intuitive.

Grouped tabs can be placed on the second panel, just below the tab bar or they can also be placed as a sidebar in the browser, plus if necessary, the additional panel can be attached for permanent use.

Moreover work continued to expand options to customize browser context menus; the contextual menus of the sidebar were added to the list of available to edit, that is to say now they are already there available to edit various browser items.

Plus they have now added sidebars for bookmarks, notes, downloads, history, and a window bar and the developers report that cWith each new release, this list will grow even more.

To speed up the launch of the browser, the option of lazy loading of web panels has been added. Previously, with a large number of user web panels, all of their content was loaded at the start of the browser, which slowed down the launch process; When using the new option, the content of the web panel will be loaded only at the moment of its activation.

For the part of the list of corrected errors, in the announcement it is mentioned that problems with getting out of full screen mode when watching a video are included.

Another bug that was fixed is that an incorrect change between tabs was generated when closing an active one and creating an incorrect name for a web page shortcut saved on the desktop.

Finally, another of the changes that stands out for the Linux version, is that The proprietary media codec library has been updated to version 87.0.4280.66.

If you want to know more about it of this new released version of the browser, you can check the details In the following link.

How to install Vivaldi on Ubuntu?

If you want to try this browser to give it a try, you can only do it by getting its deb package that it provides us directly from its official site, you can buy it from this link.

After downloading it, you only have to install the package with your preferred package manager or the other method is through the terminal.

To do this, we just have to open the terminal and position ourselves in the folder where it was downloaded and execute the following command:

With this, the browser will be installed, you just have to go to your applications menu to run it.