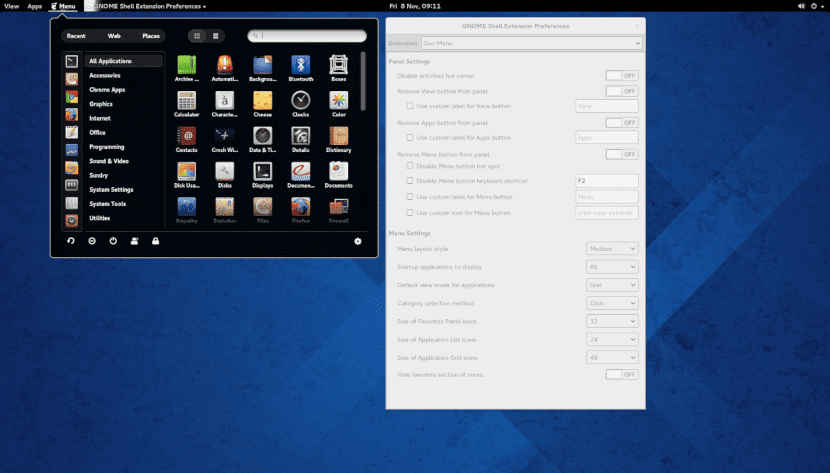 As with Unity, many users need or are looking for a way to have the old classic menu or menu on the Ubuntu 18.04 desktop. In the case of Unity, the change consisted in adding an applet to the global menu that allowed having a traditional menu. Now what Ubuntu uses Gnome as the main desktop, the installation of a classic menu is easier and faster than before.
We can do this through extensions for Gnome, although if we do not want to use this system, we can always install other alternative desktops such as Cinnamon or MATE. Next we are going to explain how to install a classic menu in our Gnome.

First we have to go to the official website of Firefox extensions and install the extension Gnome ShellIntegration. A plugin that will allow us to install any Gnome extension. Once it is installed, we open the terminal and then we write:

And now that all this is installed, we are going to the official website of Gnome extensions and we seek an extension called Gno-Menu, this will introduce a classic menu at the top of the Gnome desktop. There are many other extensions that make it easier for us to install a classic menu, but Gno-Menu is a reliable solution whose development is quite active, unlike other extensions.

But first, we have to select the version of Gnome that we have and install it through Mozilla Firefox. Once it is installed, we have to go to the Retouching application or Gnome Tweak Tool and in the Extensions tab we look for the extension to activate it. Once activated, the new menu will work. A classic menu that brings back the old Gnome look but does not disable any dock functions that Ubuntu 18.04 currently has.

Full path to article: ubunlog » Ubuntu » How to put the classic menu to Ubuntu 18.04