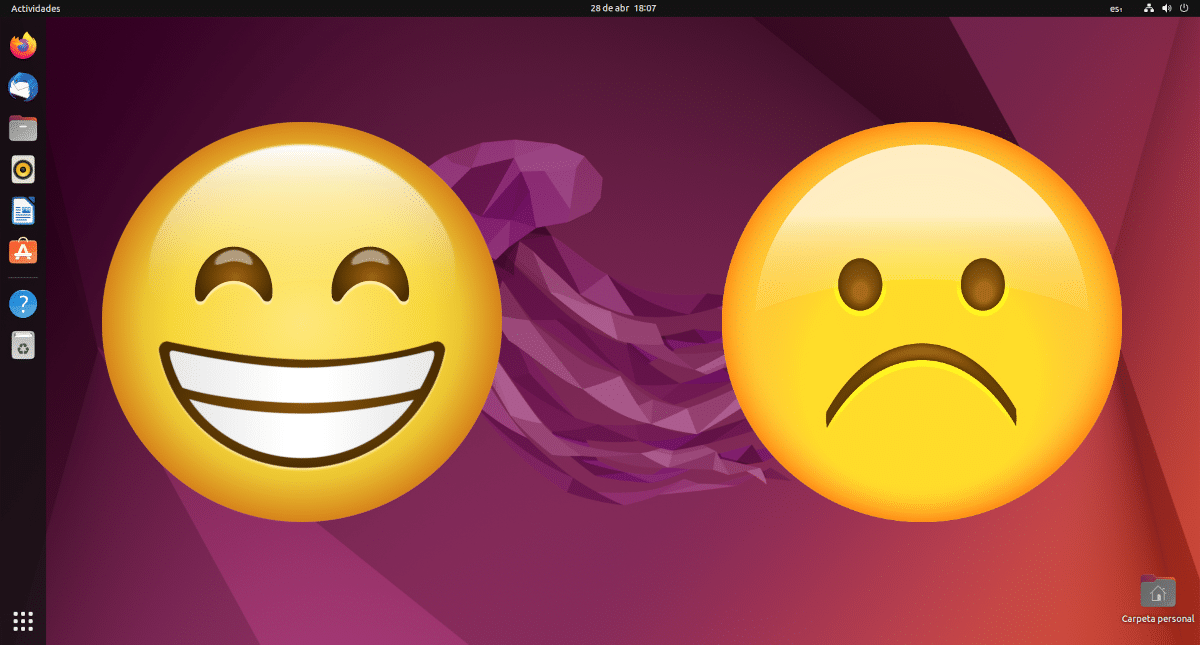 It's been almost a month since threw Ubuntu LTS 22.04. When we published the article, we alluded to what almost all developers say after a new release, that "this is the best release in history" to say that we were not going to be so exaggerated, but to say that Jammy Jellyfish was a important leap forward. Just going from GNOME 40 to GNOME 42 has already gained a lot, and that was just one of many improvements.

On Ubuntu 22.04 performance has been greatly improved with respect to past versions, something that we can all enjoy and especially those who want to install Ubuntu on a Raspberry Pi. Also, you can change, by default and without installing anything, things like the panel, which now allows us to turn it into a dock in a couple of clicks, or the accent color. But the truth, and as it happens in practically any distribution, is that most of the improvements are part of GNOME.

Is Ubuntu 22.04 an update that leaves something to be desired?

To be honest, it's not that I spend all day reading users dissatisfied with Ubuntu, nor are there many media that attack the sweet jellyfish, but I have read things that have puzzled me. The first thing I thought when I read the first article, which I'm not even going to quote, was that it was an article designed to generate controversy, so that Ubuntu users would get into the rag and, if we commented, get more visits. later i thought of Mac OS X 10.6, code name Snow Leopard, an update with which Apple introduced almost 0 new features and, even so, it is what gets the best reviews even today. I thought of Snow Leopard asking myself the question: “Did they criticize Apple as much for that update as they did for Ubuntu 22.04?

And it is that, sometimes, going fast and adding a lot is not the best thing. From time to time you have to collect cable, compact everything, make everything consistent, and that's what Apple did and what many Linux distributions and projects are doing now, like GNOME. Ubuntu got heavy on its way to Unity, and has been getting lighter with every new release since 18.10. And the novelties that it has been introducing have been the ones that touched it at all times, or that is my opinion.

Does Windows do it better?

Apple has its own ecosystem complete, and it is very good, but the truth is that you have to pay for it, and be clear that it is the most closed (and least free) option that we can choose. In a simple and official way, you can only use your macOS on your Macs, and for all this you have to leave it a little apart. With respect to the novelties that Windows has been introducing, can you criticize less than Ubuntu or Linux in general?

Not long ago they released Windows 11, and many things, they warn, still do not work as expected. That is, they released an operating system with a lower panel and a modified theme, which is incomplete and, for some, that saves it from burning. It doesn't matter if it lacks features, is less customizable, or can't be installed on many computers. In fact, I don't know of anyone who wants to have it installed on a work/production computer (or for smooth gaming).

I'm aware that Windows 11 has also been criticized a lot, but no more than Windows 10 was criticized, and the reason is more for the change to something new than anything else. Even so, those criticisms of Ubuntu 22.04 and Linux in general, which say that they are not advancing, never cease to amaze me. I don't know if they aren't real Linux users, but I haven't read how they would improve what already exists, and it seems that they don't know that in Linux there is a lot to choose from, the options are endless and there are more and more. For my part, and with respect to Ubuntu, just say that I do not agree that important changes are not being introduced, although many of them are not seen. And whoever doesn't like something, let him choose what suits him best.

Full path to article: ubunlog » Ubuntu » There are people criticizing Ubuntu 22.04 and Linux in general for the lack of innovation