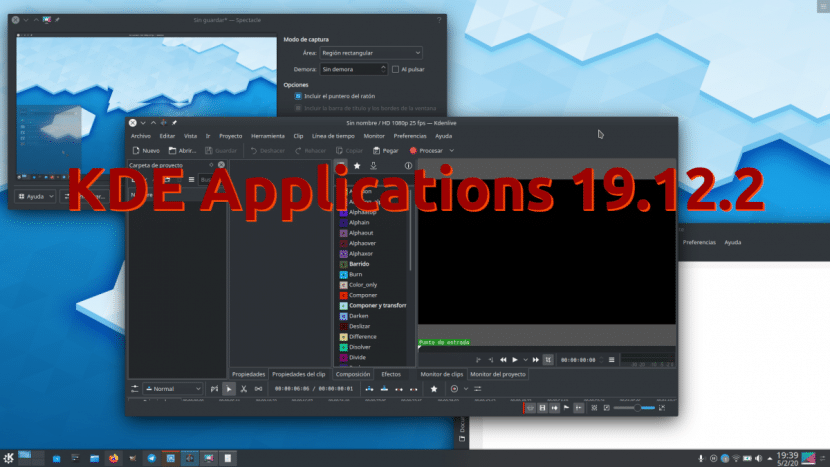 As scheduled, the KDE Community released a new release today. What they had marked on the calendar today was the launch of KDE Applications 19.12.2, or what is the same, the second maintenance version of the applications that were released in December 2019. Like the rest of the "point" updates, no outstanding functions have been included, but corrections that will improve the performance and reliability of the KDE applications.

As usual, and so is it that we mention it, the KDE Community has published two posts about this release, one in which it talks about his availability and another in which it mentions some news introduced in this version. Of course, this time they have not published the complete list of news, so we cannot know how many changes they have made exactly. If they mention new versions of apps like Latte-dock (0.9.8) or KDevelop (5.5).

Related article:
KDE Applications 19.12.1 arrives to fix the first bugs in this series

The next version will already be KDE Applications 19.12.3 that will arrive next Thursday, March 5. It will be another corrective version that they will release to polish the software. A month later, still without a scheduled date, the KDE Applications 20.04, a new major version that will include important changes, many of them in software like Elisa. We remember that Elisa could be the default player included in Kubuntu 20.04 LTS Focal Fossa, something that commented but has yet to become official (Esto it is?).

We also have to remember that most KDE software updates do not reach Discover the day of its launch unless we have added its Backports repository or an operating system with special repositories like KDE neon. Considering that the previous version did make it to the Plasma + Backports software center, we will most likely be able to install KDE Applications 19.12.2 in the next few hours.